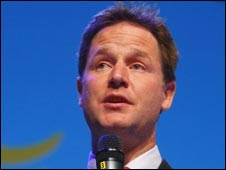 In another part of the blogosphere there are debates on 'pirate theology'. In Bournemouth this week Nick Clegg gave us pirate politics. Perhaps drawing inspiration from Jack Sparrow, and the romance and appeal of the outsider, Clegg sought to put clear amber water between the Libdems and the 'red and blue' tankers of his rivals. At the same time, he made an audacious raid on their rhetoric.
Key Lines
"Let me tell you why I want to be Prime Minister"
"The beginning of real change in Britain"
"There is less to him than meets the eye" (on David Cameron)
Key Ideas
This was a policy-heavy speech, in contrast to last year which focused more on principles and overt attacks on Brown and Cameron. It could have been a manifesto launch speech. But the top two key concepts were a smash and grab raid on Labour and Conservative:
- Change: the word was used 39 times, lifted straight from the Tories campaigning tagline, but Clegg's argument was that Cameron offered 'fake change' whilst the Libdems' is real.
- Fairness: the words fair/unfair used 15 times, lifted straight from Gordon Browns conference speech last year, where 'fairness' was the repeated mantra.
Having raided the clothes of both parties, Clegg then sought to paint himself as the champion of the poor, against the bonus-earning rich and their tax loopholes, the Robin Hood of the Recession. Nick will go into battle for ordinary people and your taxes, for young people and your jobs, for children and your class sizes. Armed with a bow and arrow and Vince Cable (no more Trident), Clegg's charge to the polling booth has begun.
Various bits of libdem philosophy came through: smaller state, individual freedom (scrapping of ID cards), environmentalism etc. But in his conclusion, Clegg sought to paint the LibDems as the natural heirs of Blair, the people upon whom all the hopes of 1997 now rested.
Much of the rest was positioning: talking of 'the old red-blue politics', listing several areas where both main parties had failed, and talking of the Libdem ability to stand up for their principles and for the ordinary person.
Policies:
Almost too many to list. Here are some of the specific policy commitments made during the 50m speech -
- Begin talks with Taliban
- 150 fewer MPs
- change the electoral system
- cut defence spending
- no replacement for Trident
- end the Child Trust Fund
- independent review of public sector pensions
- young people will be found a job or training within 90 days of losing a job.
- Cancel the VAT cut
- 10,000 more university places, 50,000 more college places
- Paid internships with £55 a week
- 800,000 placements for students.
- Classes of 15 for 5-7 year olds (inconsistent – Clegg spoke of the earliest years being crucial, so why wait till kids are 5?)
- Raise Income Tax threshold to £10,000
- More tax on the richest.
- Cancel ID cards
- 10,000 more police on the streets
- Elected House of Lords
Comments:
- It was odd that Nick Clegg began the speech with, effectively, a separate statement on Afghanistan. This seemed to have nothing to do with anything else he was saying, and the speech proper only began once he'd finished this section.
- The 'less to him than meets the eye' line on Cameron has something going for it. The Conservatives have still to come under proper scrutiny, they have bobbed to the top of the polls without very much effort, and very little in the way of concrete policies.
- No engagement here with crime levels, family breakdown, and the need for a change of culture and values, most of his solutions seem to be economic or legal. Nothing about the NHS either, which, considering how much money it hoovers up, is remarkable. But that's my hobby horse of the week at the moment....
- There's also nothing which challenges the basis of debt-driven consumer capitalism, apart from a couple of warning shots at bankers. Lots of small to medium ideas here, but I would have expected something more radical. Go back to Sherwood Forest and prepare for government? Or is Robin more effective as an outsider?
Posted by David Keen at Friday, September 25, 2009