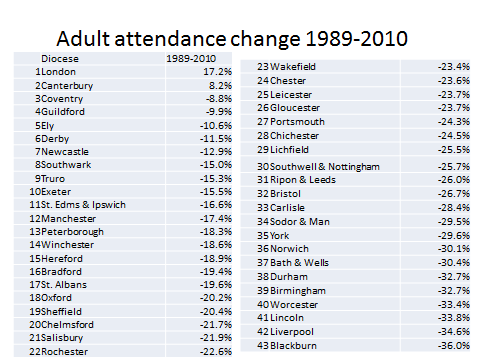 In case anyone at General Synod gets bored of talking about bishops, here's some important information about the rest of the Church of England.

The table above shows the change in adult attendance by Diocese from 1989-2010. A couple of explanatory notes, then some comments.

Explanation/Health Warning.
1. The data above is taken from Bob Jacksons 'Hope for the Church', which covers 1989-1999, and the Church of England's published statistics on attendance.
2. Jacksons data is based on 'usual Sunday attendance', and the CofE stats on 'average weekly attendance'. There isn't a massive difference in the two measures - the latter is higher, and has declined slightly slower than uSa, which isn't available for the whole of the 2000-2010 period. So the table above isn't scientifically precise, but if it's out, it will only be by a percentage or two.

Comments.
1. The majority of Dioceses are doing better than they were. 16 had a worse figure in the noughties than the 90s, and 27 were better. Also those that improved saw much bigger changes: e.g. Manchester, Newcastle and Durham all had a percentage change which was 20 points improvement or more on the 1990s. For the first two, this saw a decline of around 20% turned into moderate growth.

2. And that's where the good news ends. It's a sea of negative numbers, North and South, urban and rural, pretty much wherever you look. The majority of Dioceses have lost over 1/5 of their membership in 20 years. That's 1/5 of the income, 1/5 of the ministers (because everyone's a minister), but strangely, not 1/5 of the parishes. In 8 Diocese the figure is higher than 30%. This is arterial bleeding, not a minor scratch.

3. I wonder if there are any Dioceses which have cut the number of parishes, church buildings, or central overheads, by the same number? I suspect not. The reality of decline is that we feel duty-bound to maintain the parish system and the local church building until it kills us. So the burden is never reduced, but it falls upon a smaller and smaller number of people.

4. Who is accountable for all this? Can we, will we, ask our bishops and clergy what they've been doing, and what they're doing now? Who is learning the lessons? Or are we (in Einsteins definition of madness) continuing to do exactly the same as before in the hope of a different result?

5. General Synod has 4 debates coming up on women bishops, and none on church growth/decline. I'm sorry but that's bonkers. Anyone who thinks women bishops is the biggest issue facing the church at the moment hasn't woken up or inhaled the coffee. There is no point re-arranging dog collars on the Titanic.

6. I have the figures for childrens attendance and they are even scarier. If the church is relying on children as 'the future of the church' then we're looking at a church 60% the size of what it is at the moment.

7. The CofE has only two realistic options. The first is to start strategic planning for a church which will be 20-25% smaller in 2030, based on the continuation of current trends. The second is to shift significantly towards leadership, investment and structures which are focused on growth. There are currently incremental steps towards the latter (Fresh Expressions, mission funding, Bishops Mission Orders etc.), and a vast amount of 'make do and mend' towards the former.

I don't know what it will take to provoke the necessary sense of crisis, the deepening of conviction that we need to tackle this issue, so that the CofE overcomes its sniffiness about 'bums on pews' and recognises that there's a reason the New Testament talks about the number of people being saved on a regular basis. It's because each of those people matters to God, and each of those people is someone we're called to reach with the gospel. The CofE is largely failing in that task, and until we have reckoned with that, we call into question our claim to be called a church at all. Are we actually doing the task our Master has set us?
Posted by David Keen at Saturday, February 04, 2012