Bob Jacksons 'The Road to Growth' (digested version here) speaks of the 'self inflicted wounds' of the Church of England - decisions the CofE has taken which have contributed to declining membership. One of these is allowing long vacancies between vicars. Most Dioceses do this to save money, though on the positive side it can give parishes time to take stock and work out what kind of leadership they need for the next chapter of their mission and ministry.

Jacksons research suggested that churches with a vacancy of longer than 6 months would see a decline in membership, and that even though membership often rose with a new leader, it didn't recover to the levels prior to the vacancy. From a sample of 155 churches, vacancies of 6-9 months saw a drop of 9% during the vacancy, those of 9-12 months a drop of 12%, and longer vacancies saw a drop of nearly 20%. Here's his chart, which you can find in this presentation. 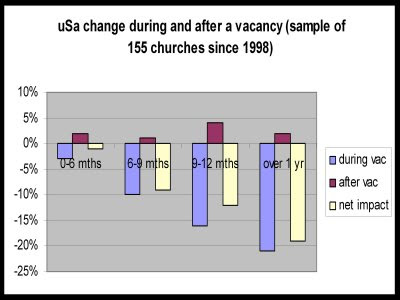 I have to say this makes a lot of sense, and has been my own experience of churches. There is one here in Yeovil which saw a 8% drop in membership during a recent 9 month vacancy, which (thankfully) has recovered strongly since the appoinment of a new vicar.

But: at our Diocesan Synod last month, a local statistician presented a different picture. He argued that, from his evidence, a vacancy (also known as an 'interregnum') had no effect on church membership. He compared 1 group of churches, which had experienced a vacancy, with a control group of churches which, over the same period, hadn't experienced a vacancy (there were a couple of other things he did to iron out differences, which I won't bore you with). With over 100 churches in each group to iron out individual quirks, any major differences between the two could be linked to the absence of a clergy leader.

I was expecting his stats to back up Jacksons research. They didn't. He found no evidence for the effect of a vacancy on membership at all, whether 1, 2 or 3 years after the event, whether the church was large or small, urban or rural. Here are his stats

Basically, both groups showed a decline of around 5% over the same period.

I really don't know what to make of this. Here are two decent sized samples of churches, analysed differently, which produce completely different results. At gut level I'm with Jackson, his findings just seem to make sense, but......

You can prove a lot of things with statistics, and this may just mean that the leadership of Anglican clergy is so ineffectual that it doesn't make any difference whether we're there or not (!), but I'm not aware of any other organisation that leaves long leadership vacancies because it sees them as a good thing.

I don't have the detailed workings, and the Bath & Wells chap is a professional statistician whilst I just have a couple of school passes at Maths. But now this is bugging me...

Update: Bishop Alan goes into detail about what they do in Bucks when a parish falls vacant. Good discussion there, and some interesting, and creative ideas about what to do during a vacancy. There's more to this than the length of the gap, there's what you do with it: just wait 11 months and save some cash, or use it to do some hard work on strategy and community?