When the song of the angels is stilled, When the star in the sky is gone, When the kings and princes are home, When the shepherds are back with their flock, The work of Christmas begins: To find the lost, To heal the broken, To feed the hungry, To release the prisoner, To rebuild the nations, To bring peace among people, To make music in the heart.
(Howard Thurman)
Posted by David Keen at Tuesday, December 24, 2019 No comments:

The victim lives about 1 1/2 miles away from Grenfell Tower and donated generously at the time of the tragedy, does that have any bearing on this? Or the fact that she has 55 rooms in her house which, as far as anyone is aware, haven't been offered to any of the Grenfell victims? What about all the other people on that street who aren't in the news today but enjoy the same kind of lifestyle? Does the fact that I have a spare room and haven't offered it to the victims either make me a hypocrite? If so, is it only people with absolutely nothing to spare who can question the rich?

Is it acceptable for anyone to have a 'dog spa' in a city where 4000 are sleeping rough?

How much inequality is too much?

Its a common tactic of magicians to use misdirection - get the audience's attention on one thing so that the real trick can be executed elsewhere.

This is a misdirection election. Directly after winning a Commons vote on his Brexit deal, Boris Johnson dissolved Parliament. Why? Because his only way of winning an election was to pitch the Conservatives as the Brexit Party, knowing that the Remain vote would be split and leaderless. 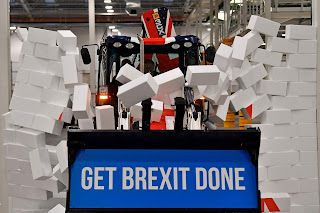 Take Brexit out, and who would win? Without 'Get Brexit Done', what else have the Conservatives had to say? Vague stuff about unleashing potential, statistically false claims about hospitals and nurses, and restoring police numbers to almost what they were pre-austerity.

Beyond that, as if reflecting the fact they have very little else to say, the Conservatives have disappeared from everything except their own staged events. Andrew Neil is the tip of the iceberg, they have systematically avoided interviews, debates and phone-ins throughout the campaign, Victoria Derbyshire noting this morning that following a month of daily requests not one cabinet minister has ever been put up to appear on her morning TV/radio discussion. People who avoid scrutiny have something to hide.

Labours use of the NHS has a big whiff of misdirection about it too, the documents released mid-term don't really prove its up for sale. Yes it's underfunded and stretched to breaking point, but like the Tories, Labour see in the NHS their own giant trump card that just about hides the other weaknesses in their hand.

This Sunday, Anglicans will hear of John the Baptists question from prison 'are you the one, or should we expect someone else?' Expecting a Jesus bringing judgement and upheaval, instead John suffers the limitations of the Herodian prison system whilst the hoped for Judeaxit from the Roman Empire is nowhere to be seen. Jesus reply: open your eyes. Notice what is happening - to the blind, the lame, the poor, the deaf, the excluded. The good news is coming first to the people nobody reports on. 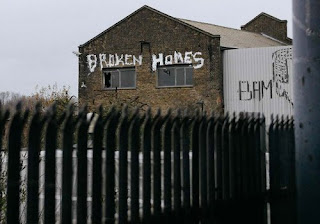 Open your eyes. Don't follow the magic show. Notice what is happening to the poor, the disabled, the excluded, the hungry. Notice what is happening that politicians never talk about, in the very foundations of our society in families, parenting, culture, values. Notice the things that don't come down to money, and numbers of people employed to do x or y. Love, justice, the planet, kindness, truth. Notice the people that don't register - asylum seekers, food bank users, children in the care system, the isolated elderly, the people affected by UK foreign policy, the anxious and depressed.

Once you've seen how the trick works, its not magic. Turn away from it, and the daily insistence for the last month that this is all we should be noticing. What else do you see and hear? What else do you notice? If you remove the magic trick from the show, what else becomes important instead?

The Election - a Little Church of England Issue

Justin Welby is currently 63, and has been Archbishop of Canterbury for the best part of 7 years, since March 2013. His immediate predecessors were:

Under the fixed term parliaments act, the next election after this one isn't supposed to be until December 2024, by which time Justin Welby will be 1 month off his 69th birthday, and will have been in office for nearly 12 years.

So based on recent form there is a very good chance that the next Archbishop of Canterbury will be chosen by Boris Johnson, or (long shot) Jeremy Corbyn. The former is likely to plump for a white, male privately educated Oxbridge graduate, given the opportunity, and the latter is likely to choose for a left-leaning female, given the opportunity. (update: I've been put right on this - the process is now that they get 1 name to approve, with another in reserve)

All the candidates will be capable - the shortlist of 2 traditionally given to the PM comes out of an intensive process of prayer, interviews, advice and selection. But neither potential PM is particularly keen on the church and what it stands for. Though being shortlisted for ABofC is one of my worst nightmares, it would be even more of a nightmare to think I was appointed to the job by a man who'd broken in letter or in spirit nearly all of the 10 commandments, and thought Christianity was a myth made up by a bunch of religious zealots on the fringe of his beloved Greco-Roman society.

Both have pledged some reform of the constitution in their manifestos, including this rather startling proposal from the Tories After Brexit we also need to look at the broader aspects of our constitution: the relationship between the Government, Parliament and the courts; the functioning of the Royal Prerogative; the role of the House of Lords; and access to justice for ordinary people. ... In our first year we will set up a Constitution, Democracy & Rights Commission that will examine these issues in depth, and come up with proposals to restore trust in our institutions and in how our democracy operates.

Throw into the mix the age of the Queen, and the 'Defender of Faiths' line taken by the next in line to the throne, and there is quite a shake-up coming down the tracks. The end of the Elizabethan age will see a massive rethink about the role of the royalty, and once you pull at that thread it isn't long before you get to the Church.

Here's my take: disestablishment is coming, whether the good old CofE wants it or not. It has already started in lots of small ways - e.g. the series of changes to marriage law over the last 20 years. The question for the next Parliament is whether the church will get ahead of the curve on this, or be dragged along by events. The CofE needs its own vision of what a post-establishment Anglican Church could look like, rather than have one forced upon it by politicians who see neither merit nor votes in working with us. The Estalibshment of the church belongs to a previous age, it will go sooner or later, and as we have seen with attitudes to trans issues, the political and cultural weather can change very suddenly, and very fast.

Part of Justin Welby's legacy needs to be this: to get the Church of England thinking this through, and leading the debate, before a bandwagon appears from elsewhere - whether that bandwagon is driven by events, electoral reform, ideologues or royal succession. By then it will be too late to do our thinking.
Posted by David Keen at Sunday, December 08, 2019 5 comments:

Email ThisBlogThis!Share to TwitterShare to FacebookShare to Pinterest
Labels: Archbishop of Canterbury, Church of England, election 2019

The nationalisation of parenting continues apace:
‘High quality affordable childcare’: all parties are promising it in various degrees. The Conservatives wish to extend wrap-around childcare at school and holidays for working parents. Labour promises an extension to 30hrs a week for two to four year olds and to extend provision for one year olds and the Lib Dems promise to deliver the best start in life for children by extending childcare provision at 9 months.
All these so called ‘family friendly policies’ are offered to mothers only if they agree to hand over care of their children to external settings and get out of the home. Care, which was once done for love and supported through family tax allowances, is now only recognised and supported if it is a traded commodity and measured as growth.
High quality long-term committed stable child care is a mother at home or a father or a grandmother – even a childminder in a home setting, but none of these qualify for any support. Economic pressures aside, spending more time with their children is what the vast majority of mothers want, and I daresay if one year olds could speak (some scream at the nursery door at being wrenched from their mother) is what they would prefer too.
But their voices are ignored at best or at worst misrepresented in political debate and policy circles. One freedom the ordinary mother no longer has is to choose to care for her own children: Mothers say choice is ‘virtually eradicated’ (Netmums: Great Work Debate) . 88 per cent of mothers with very young children said the main reason for returning to work was financial pressure’, according to the Centre for Social Justice.
And yet there is a clamour for childcare and a desperate need to help families struggling with debt, rising rents and living costs. Families are drowning and asking for a helping hand. They are not asking how they got into the river: they are too busy swimming to survive, and ‘affordable childcare’ appears to be a way to enable the mother to work to plug the income gap.
But is ‘affordable childcare’ the answer to relief from poverty? It is not – and unfortunately families will find out all too late that both parents are working very hard for very little extra disposable income. What they will have lost is family time; time with their children, which they cannot recover.
read the rest here.
Posted by David Keen at Thursday, December 05, 2019 No comments: