If the mainstream media was all we had to go by, the only 3 things we'd know about Dominic Cummings are
a) Benedict Cumberbatch
b) he said rude things about Tory MPs
c) he didn't show up to a select committee.

If they'd spent as much time actually reading his blog as they did trawling it for headline-worthy quotes we might all benefit. There is some pretty incisive critique of the way we do politics ("it is impossible to describe the extent to which politicians in Britain do not even consider ‘the timetable and process for turning announcement X into reality’ as something to think about — for people like Cameron and Blair the announcement IS the only reality and ‘management’ is a dirty word for junior people to think about"), and a guy who has thought and read deeply about how we do decision making and deliver results.

Fascinating and rewarding read, if you have a spare hour. dominiccummings.com/
Posted by David Keen at Wednesday, July 31, 2019 2 comments: 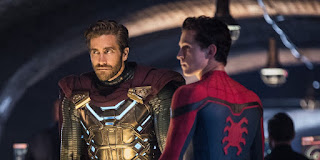 If scepticism extends to everything we see, then lets go there: can we trust this film? Or my reading of it?
Posted by David Keen at Tuesday, July 30, 2019 No comments: