Everlasting God
you sent the gentle bishop Aidan
to proclaim the gospel in this land:
grant us to live as he taught
in simplicity, humility, and love for the poor;
through Jesus Christ our Lord. Amen


FROM the aforesaid island, and college of monks, was Aidan sent to instruct the English nation in Christ, .... it was the highest commendation of his doctrine, with all men, that he taught no otherwise than he and his followers had lived; for he neither sought nor loved any thing of this world, but delighted in distributing immediately among the poor whatsoever was given him by the kings or rich men of the world. He was wont to traverse both town and country on foot, never on horseback, unless compelled by some urgent necessity; and wherever in his way he saw any, either rich or poor, he invited them, if infidels, to embrace the mystery of the faith or if they were believers, to strengthen them in the faith, and to stir them up by words and actions to alms and good works.


...... whatsoever gifts of money he received from the rich, he either distributed them, as has been said, to the use of the poor, or bestowed them in ransoming such as had been wrong. fully sold for slaves. Moreover, he afterwards made many of those he had ransomed his disciples, and after having taught and instructed them, advanced them to the order of priesthood.


...It is reported, that when King Oswald had asked a bishop of the Scots to administer the word of faith to him and his nation, there was first sent to him another man of more austere disposition, who, meeting with no success, and being unregarded by the English people, returned home, and in an assembly of the elders reported, that he had not been able to do any good to the nation he had been sent to preach to, because they were uncivilized men, and of a stubborn and barbarous disposition.

They, as is testified, in a great council seriously debated what was to be done, being desirous that the nation should receive the salvation it demanded, and grieving that they had not received the preacher sent to them.

Then said Aidan, who was also present in the council, to the priest then spoken of, "I am of opinion, brother, that you were more severe to your unlearned hearers than you ought to have been and did not at first, conformably to the apostolic rule, give them the milk of more easy doctrine, till being by degrees nourished with the word of God, they should be capable of greater perfection, and be able to practice God's sublimer precepts." Having heard these words, all present began diligently to weigh what he had said, and presently concluded, that he deserved to be made a bishop, and ought to be sent to instruct the incredulous and unlearned; since he was found to be endued with singular discretion, which is the mother of other virtues, and accordingly being ordained, they sent him to their friend, King Oswald, to preach; and he, as time proved, afterwards appeared to possess all other virtues, as well as the discretion for which he was before remarkable.

source: Bede. My emphasis.
Posted by David Keen at Saturday, August 31, 2013 No comments:

Your SHAPE For God's Service: superb course on spiritual gifts and calling

Last year we used an excellent course for Lent, 'Your SHAPE for God's Service', designed to help people discern their own gifts and calling.

The course is based on material from the Purpose-Driven Life, that personal gifts and call can be found at the intersection of 5 factors:
Spiritual Gifts
Heart (what you're passionate about)
Abilities ('natural' abilities)
Personality
Experience (the key experiences that have shaped you)

The course involved a certain amount of 'homework', - e.g. handing 2 other people a list of common natural abilities and asking them to tick the ones they think you've got. For a few people this was a bit threatening, for others it was incredibly affirming - Brits aren't brilliant at giving feedback, or saying 'you're really good at x', and for some this was the first time they'd had any kind of affirmation in certain gifts and skills.

One result of the course was a number of people enthusiastically getting stuck in to new areas of ministry: from pastoral work to youth and children, to making cups of tea and coffee. For others, you could see the lights going on as they realised that what they did in their workplace day to day was using a God-given talent and could be done in His service.

The course has been rewritten and improved, and is now available as a free download courtesy of the lovely people at the Arthur Rank Centre. It's the kind of things we're likely to run again, and I know of one other church which uses it as a follow-up to Alpha. Highly recommended.
Posted by David Keen at Thursday, August 29, 2013 3 comments:

2 useful lists: what the vicar says, and what to say to your vicar

A couple of lovely lists:

Biblical Preaching is offering 50 'preaching tweaks' - small experiments and one-degree shifts in preaching which can make a big difference for anyone aspiring to be an effective preacher. One of the few things I remember clear as day from training college is one lecturer saying she always tried 1 new thing whenever she preached. The 'preaching tweaks' lists reminds me that my preaching is still a work in progress, and there's a lot I can do to improve and stay fresh.

John Martin has posted on the Fulcrum site '10 things a Vicar needs to hear - often'. There's probably a companion piece to be done on 10 things any church member needs to hear often, but it's an excellent list. 'Is everything ok?' 'enjoy your time away' 'how can I help?' are things some of us rarely hear, and I know some clergy who get the message - both spoken and unspoken - that they aren't allowed not to be ok, and that time off is something clergy should always feel guilty about. Andy yes, sometimes we contribute to our own downfall - if you wont accept offers of help, don't be surprised if they dry up.

...and on the topic of lists and vicars, Jeremy Fletchers 'Rules for Reverends', which originally appeared on his blog, (e.g. 103: no, the compilers of the lectionary didn't know what they were doing; 87. Being on the committee of another organisation is a good way of realising that perhaps the PCC isn’t so bad after all. Or recognising that, actually, it is.)  is now published with added Dave Walker cartoons.

"To be a Christian is to accept that Jesus Christ existed, that he made the amazing claim to be God and the only route to eternal life, and that those claims were true. If that last sentence is accurate then, to be blunt, our personal opinions of Christians and Christianity are irrelevant because Jesus Christ's life death and resurrection would become the most significant events in the history of the universe - and how you respond to those facts would be the most important decision you ever need to make."

Nicky Gumbel? nope, it's Tim Farron, president of the Liberal Democrats, in 'Liberal Democrats Do God', a surprising conference-season publication. There's been plenty of chat about this already, from Ship of Fools to the Sheffield Biblical Studies blog. The latter points out that the 'God' of the Libdems, one who values individual freedom above all else, sound remarkably like Margaret Thatchers deity.

Other contributors include Sarah Teather (update, who just announced she's quitting), pensions minister Steve Webb, and several other MPs and members of the Lords.

The most peculiar response came from Jacob Rees-Mogg, a neighbouring MP, via assertion of the legend that Joseph of Arimethea visited Glastonbury with Jesus. This is on a par with the Pub Landlord's 'proofs' of God's existence.

You can see various excerpts from the book on Amazons 'look inside' feature, including the contents list - chapters cover immigration, environment, justice, international development, and whether you can be a Chrsitian and a LibDem. Good for the contributors for putting their heads above the parapet, even if you disagree with them.
Posted by David Keen at Tuesday, August 27, 2013 1 comment:

A couple of local church stories:

Elsewhere, a village church has been 'attacked with lego' but once you get past the headline it's all very Postman Pat: the PCSO has a word, the vicar has a word, the unruly youngster says sorry and promises to help out with a litter pick. But you do have to wonder what 'enthusiastically lobbing' is code for....

For a more constructive (geddit?!?) use of lego, see this.

It's emerging that several members of the Cabinet were hoping to be named as the new Doctor Who, and are disappointed that the role has gone to a fictional spin doctor. Various names, and the reasons they were turned down, are emerging:

Teresa May: was planning to repaint the TARDIS with the UK Border Agency logo and travel the universe with the message 'Aliens Go Home'

Michael Gove: new outfit closely resembles that of a grammar school headmaster, and showed a strange reluctance to travel forward in time past 1975, a bit like his education policy

Ed Milliband: hopeless, can't distinguish between UNIT and UNITE, unable to speak to any of the UNIT personnel without saying 'no, I don't want your money, now quickly go away we mustn't be seen together'.

Nick Clegg: spends the last 5 minutes of each episode trying to explain why he'd do things differently whilst everyone else is saving the universe.

Eric Pickles: planned to travel the universe taking away whatever financial resources the local leadership has, and then leaving them to sort their own problems out.

David Cameron: only turned up for 1 in 3 episodes, leaving Clegg and William Hague to do most of the fighting for him. Catchphrase 'must work hard and get on' not really zippy enough.

William Hague: has been cast as a Sontaran

Attempts to cast a real doctor were scuppered by the fact that none of them were available at weekends.
Posted by David Keen at Tuesday, August 06, 2013 No comments:

Email ThisBlogThis!Share to TwitterShare to FacebookShare to Pinterest
Labels: Doctor Who, TV

Teresa May teams up with Richard Dawkins 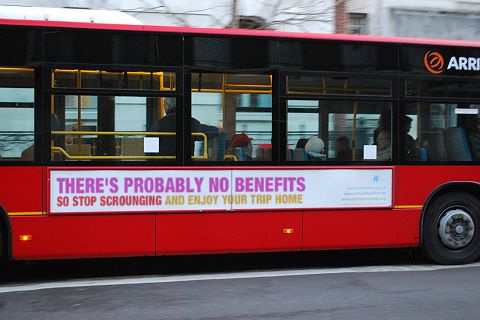 A new lease of life for the agnostibus. After all, it worked so well last time, all those buses driving round London telling people there's 'probably no God' and what happens? Yup, the church in London grows faster than anywhere else in the country. However, as one of the main drivers of this is immigration, here's an obvious common cause for the Home Office and the Humanists.
Posted by David Keen at Monday, August 05, 2013 No comments:

brilliant.
Posted by David Keen at Sunday, August 04, 2013 No comments: