I'm working my way through some of the material from last months Church Growth Research Programme report, and came across something quite startling, though so far little reported. The slides from David Voas presentation on numerical growth have lots of helpful charts on different factors in church growth. There are a couple on the personality type of clergy.

Most of us who've been through vicar factory have probably done a Myers-Briggs test or three. If you don't know it, the test explores 4 aspects of personality (here's my rough summary):
The startling finding is this: "Growth is associated with E(xtravert) and N (intuitive). The combination of E and N is particularly effective. I-S clergy are three times as likely to preside over decline as substantial growth, E-N clergy are twice as likely to experience substantial growth as decline"

Extraverts will tend to do more motivating and enthusing of people, and here is the correlation in the research between 'motivating' (generating enthusiasm and inspiring people to action) as a personality quality for the vicar, and how much their church has grown, or not. 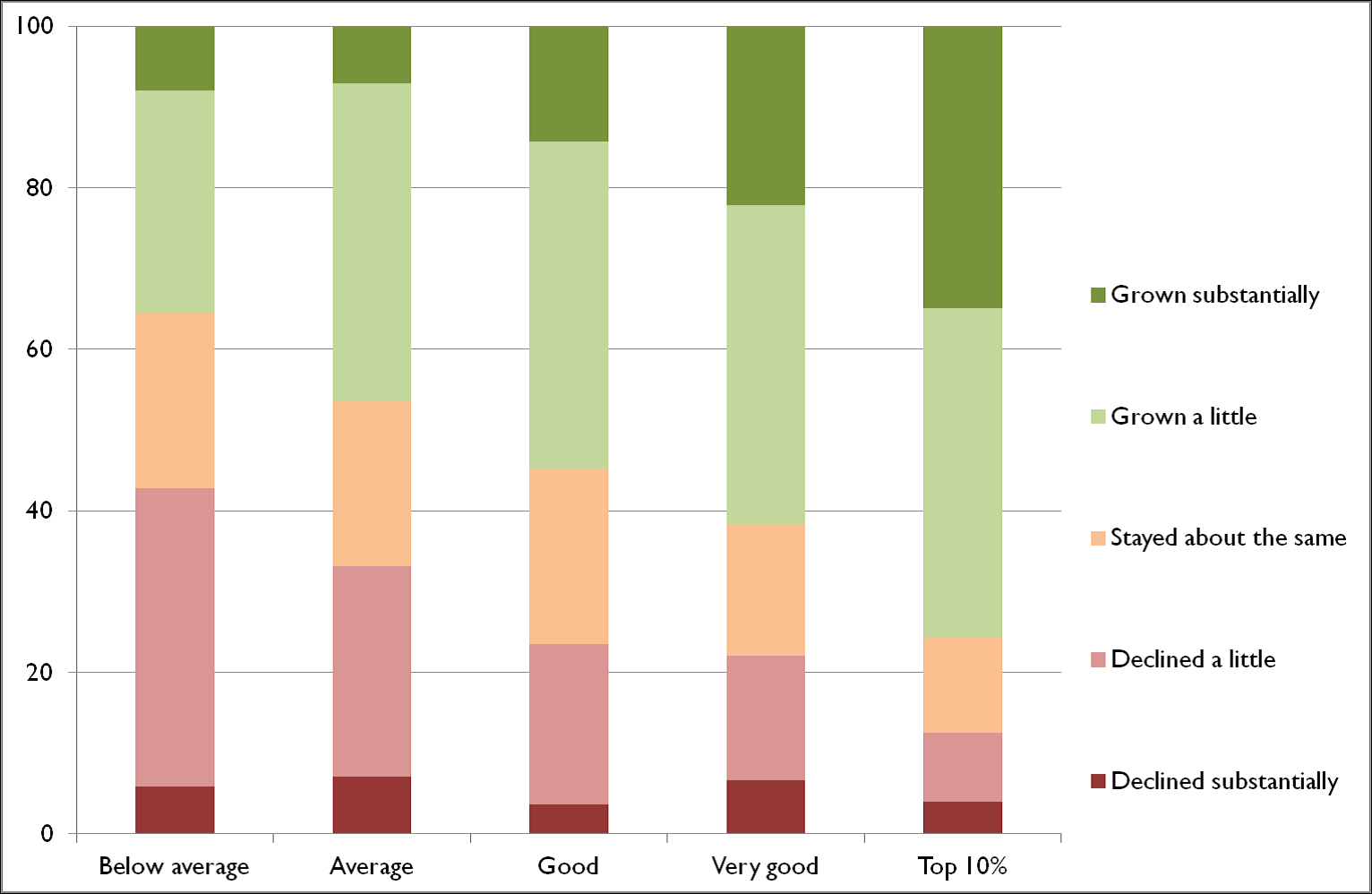 Alternatively, being 'empathic' and 'persisting' were identified as 2 qualities which don't make for church growth. Both are good qualities, but if 'persisting' becomes 'inflexible' and 'empathic' becomes 'don't do anything that will upset people" then its easy to see how a church can get stuck.

They are also two qualities which link at a very deep level to the culture of the CofE and the way it has traditionally seen ministry. I remember a visit to a senior CofE cleric who suggested that if I wasn't motivated principally by doing house visits to the sick (pastoral care) and saying my prayers according to the daily office (persistence) then perhaps I didn't belong in the Anglican church. Do we have a serious cultural problem here?

I don't believe that these charts simply sanction lack of 'empathy' or 'persistence' - you need persistence to see a vision through, and you need empathy to love people. But perhaps the role of the leader is to make sure that good pastoral care is going on, rather than doing it all themselves. For the Anglican church to grow, so that we can keep saying our prayers and loving people, we need more leaders who don't fit the current mould.

As an extrovert (I blog, what did you expect?) intuitive, I find this all quite encouraging. But what does it mean for people who are wired differently? One of the other qualities strongly correlated with growth is 'reflection' - the ability to evaluate what you're doing and change/improve it. That's something introverts should be good at. And maybe it also encourages us to think about leadership teams, rather than vicars alone, and enabling lay leadership with the qualities which we ourselves lack. We have both a lay pastoral team, and visionary/motivating leadership on a new building project, also led by a lay member of the church.

Final note of caution: the figures above are based on the leaders own reports of whether their churches are growing or declining. You'll notice that it looks like the majority of churches in the survey are growing, which clearly isn't the Anglican reality. So the stats may be less stark, but they're still significant.

update: plenty of debate in response to this on Twitter, if you can make sense of it!

update 2 good reflections from Jody Stowell on what constitutes good leadership. Makes the important point that a good leader is reflective, which is also made in the research, and that's not always what comes naturally to Extraverts.
Posted by David Keen at Wednesday, February 05, 2014