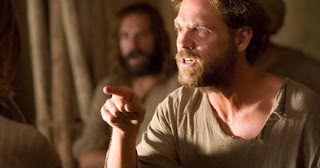 Superb.
Everything is slotting into place, and 30m where (seemingly) not a lot happens all builds an incredible sense of anticipation and foreboding. Some brilliant scriptwriting too:
Caiaphas: "I would rather sacrifice one man and save Judea"
and a fantastic scene by the river where Jesus spells out that he's going to die, and then be raised again. We're so used to hearing those words, that we don't clock how cloud-cuckoo they might have sounded to the disciples. It's clear, in a very understated way, that they think he's starting to lose it, and that he'll just die and that will be it. Their fear comes across powerfully, and Johns anger at having given up family, business and a life in Galilee only for Jesus to go and get himself killed is scorchingly real. Lots of familiar words of Jesus get brought to new life in this exchange: 'those who give up their life will find it.' Great stuff. A similar job is done on a series of teachings in the temple, linking together the rich, the righteous, the last being first etc., but all taught as though Jesus is doing it off the cuff, in response to what he's seeing and hearing.
Even the 2 mugger/murderers from episode 1 slot into place: sentenced to crucifixion by Pilate, we'll be seeing them again next to Jesus on Friday. There's also something starting to go on with Mrs Pilate - just a glance exchanged at a distance with Jesus, but the economy of this production is such that that's all you need. Simmering nicely, I'm really looking forward to the next bit.
The BBC comments section is positively brimming with praise. As long as Jesus gets more praise in the end than the Beeb......!!
Posted by David Keen at Monday, March 17, 2008