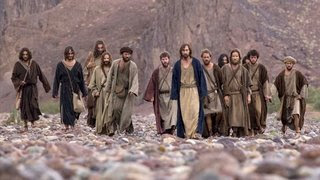 Richard Frank has already posted a good review of this, nearly all of which was stuff I was going to write. The comments section on the Passion website is up and running on last nights episode, and Mark Goodacres blog links to the media reviews which are coming in, all of which look pretty positive. The main fly in the ointment is the Telegraph/Mail axis trying to stoke a 'row' story which is basically non-existent, but it must be hard getting used to a TV portrayal of Jesus which doesn't play it for controversy.
I must admit I found last nights episode hard to get into. There was certainly a great feel and look to the production, but with every disciple looking dishevelled and bearded, it was hard to tell who any of the main characters were, let alone the various extras introduced into the story from the side, like the 2 men murdering someone in a bazaar and dumping him in a vat of red dye.
Once the characters had been introduced, it started to settle down nicely. There aren't any hysterics here, all the characters are pretty believable. The story is told around the axis of Jesus-Caiaphas-Pilate. Pilate wants the festival season to go quietly to keep him in Tiberias' good books, Caiaphas resents Pilates power in Jerusalem, and wants to show that he can manage his own people, and Jesus is one of several flies in their mutual ointment.
The portrayal of Jesus by Joseph Mawle is excellent - he teaches as he walks, engages with people, and has a combination of depth, mischief and wisdom. I'm slightly less sure about the hand this Jesus is dealt by the script: there is a lot of stuff about everyone being brothers together - a gospel of inclusion that could have come straight of out of the New Labour Bible - and about the Kingdom of God being in people's hearts. At the pool of Bethesda, Jesus and the disciples busy themselves mopping the brows of the sick and crippled. But where's the power? Where is the message of God doing something new? There was more to Jesus message than teaching universal brotherhood to a culture blinded by prejudice and social stratification.
The series plausibly recreates the rising anxiety of the Temple authorities at the actions and words of Jesus, and it's precisely because Jesus doesn't show his hand that they get worried. If he was clear about his aims, everyone would know where they stood, but this interpretation makes a plausible case for the authorities getting edgy based on Jesus ambiguity, rather than his direct Messianic claims and powerful and crowd-pulling miracles.
The disciples, Judas excepted, are background figures, a forest of beards in a bearded world. I think I could pick out John (or was it James?) from his face, and Matthew from his Welsh accent, but can't recall a single reference to Peter, which is a bit odd. More is made of the 2 Mary's, and of a repentant female prostitute, in order to add some female voices to the mix.
So I wasn't blown away by it, but not massively put off by it either. Regional accents aside, it's trying to do justice to the historical setting, the political balance of power, and how Jesus teaching and actions would have played against that setting. The fact that it feels like an alien world is maybe a good thing - it is an alien world, 2000 years and several cultures away. Trying to make it too much like culture we know makes the gospels tell our story, rather than their own.

Finally, the other striking thing was the sheer ordinariness of it all. Jesus teaching comes across as real stuff said to real people, rather than holy writ. The crowds around him aren't massive, and his entry on a donkey is a journey of a couple of hundred yards before he gives the donkey away (a nice touch) and the crowd dissolves. You don't get the sense that these are events that made history, which is what makes them so much more plausible. Barabbas aside, nobody is black and white: perhaps the least appealing is the disciple who keeps whipping his dagger out at every available interval, but these are all people with recognisable human responses and characters. Trouble is, they also have recognisable faces from other TV dramas! We had several 'oh it's so and so from, um, what were they in?' moments.