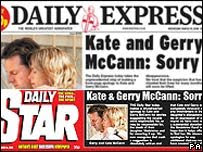 Great to hear that the Express and Star have published front page apologies today to Gerry & Kate McCann for a series of scandalous and malicious articles over the last year. The public crucifixion of the McCanns by sections of the media is hopefully over.
The temptation is to gloat, that they had it coming, that this humiliation is a suitable punishment for a couple of the nastier feral beasts. I would love to.
But Jesus prays for those who crucify him that God would forgive them. The Romans offered no front page apology, but Jesus wanted them forgiven anyway, and given the chance to repent and find new life. Whether the Express and Star are sincere or not, Jesus would not gloat over their climbdown, he would forgive. Hard though it is, I have to try to be like him.
Posted by David Keen at Wednesday, March 19, 2008