Hoggard and Harmison out for 2nd Test 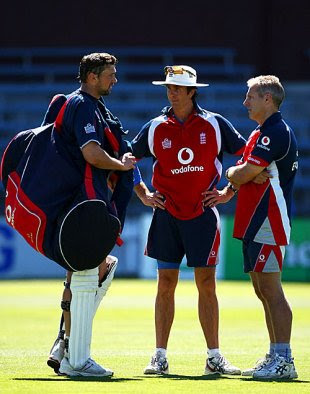 Surprise news this morning that England have dropped both Hoggard and Harmison for tonights 2nd Test in New Zealand. Harmison everyone expected, but Hoggard has been the consistent backbone to Englands attack for 5 years, whilst other bowlers form has been erratic (Harmison, Panesar), or they've dropped out through injury (Flintoff, Jones, Giles).
The Wisden site calls the decision 'desperate'. 'Brave' might be a fairer term. The replacements are young but inexperienced (Broad) and inconsistent (Anderson), but that's the whole point of having a squad system. Football managers have been experimenting with a rotation system for a few years now, given the demands of the Premiership. With several recent high-profile implosions of Test players (Englands Marcus Trescothick, more recently Shaun Tait of Australia) maybe it's time for cricket to do the same. When the Aussies start taking time out for 'physical and emotional exhaustion', you know things are getting out of hand.
Cricket, of course, goes back at least to the 1st century AD. Evidence can be found in chapter 2 of the book of Acts when "Peter stood up with the 11 and boldly declared" (verse 14, paraphrase). The early church had a squad system too - in the previous chapter they choose from 2 potential subs to take the place of Judas Iscariot. Everything was a team game: church leadership, mission, food distribution (a team of 'deacons' is chosen in Acts 6), and it made sense to have reserves to draft in when people weren't at the top of their game, or if they went off the rails.
One problem endemic in the church at the moment is that we try so hard to keep going things which worked in the past. Any local church can end up at full stretch, with no spare people to allow a squad rotation system. Very often, when folk get the chance for a rest, they drop out for good. I know some people locally who were up to their eyes in their village church, but since moving away from their village they're having a 'well earned rest'. We're trying to develop a system of deputy leaders for our cell groups/home groups, so that the group leaders don't have to do it all on their own. However we're a long way from doing that for other key leaders - youth work, childrens work etc.
Jesus was regularly getting the disciples away from the demands of ministry to rest. It's very hard to perform at your peak consistently for any stretch of time. England are hoping that Hoggard and Harmison will have their fire re-ignited by being dropped from the side. It's a massive gamble, because it might not work for Broad and Anderson, and it might not work for the 2 H's either. Maybe Harmison just wants to be with his wife and new kid - and why not? Some things (and I can't believe I'm saying this) are more important than cricket.
Posted by David Keen at Wednesday, March 12, 2008