Just been up to Brimsmore Garden Centre to organise the Christingle for their 'Magical Christmas Evening' on 11th December (7pm, if you're in the area). This was one of a few new Christmas things we trialled last year to see if they would work, and after a good sing with 50 or so people last year, they've invited us back to do another one. Talking to the staff, it sounds like there's been quite a bit of interest among customers.
I don't know whether it's the season of goodwill, or just because people in Yeovil are nice, but there always seem to be plenty of open doors, and willingness to work together. The local nursery have asked for a Christmas service in church, and the Parish Council have let us put posters advertising the Christmas services on their noticeboards. 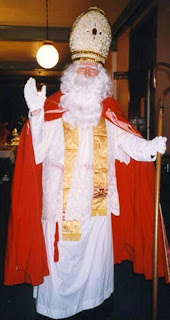 Tomorrow is the eve of St. Nicholas Day, so we're taking biscuits round to the neighbours in the evening - a tradition we nicked from relatives who lived in Holland for a while (did you know that 'Santa Claus' comes from the Dutch for St. Nicholas?) It was a great way to get to know people last year when we'd not long moved in, and in turn gave rise to a round of very nice dinner parties amongst the folk at this end of our street. More importantly, when a neighbour was recently bereaved, we were able to rally round as neighbours and support in practical ways, rather than just being strangers who'd become too embarassed at not knowing one another to make the first move.
Posted by David Keen at Tuesday, December 04, 2007