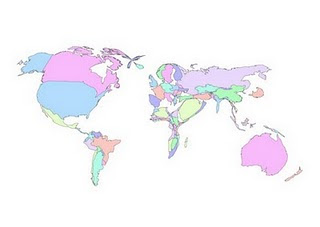 This is a redrawn global map based on food consumption. It's not quite as bad as the one below, based on military spending, though the top bloaters are pretty much the same suspects.
Shallowfrozenwater explains more.
"In 2006, the World Food Program produced, but never publicly released, a map charting food consumption. Dubbed the “Fat Map,” it shows where the world’s calories go. Nations grow or shrink based on how much the average person eats. Depending on your perspective, it maps starvation or overeating.
The mis-distribution of food goes deeper than even the “Fat Map” implies. In India, for example, more than 300 million overweight people coexist with another 300 million who starve. Chronic diseases like diabetes and heart disease that often stem from overeating are growing at a far faster rate in developing countries than in the more prosperous West. 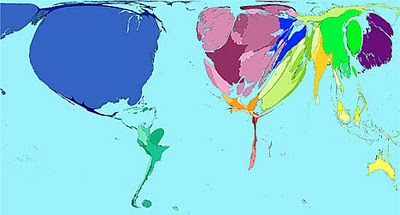 I take it everyone is ok with this?
Posted by David Keen at Monday, January 11, 2010