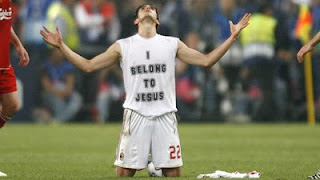 Would God rather be on the pitch, or in the stands watching? Being omnipresent He can, of course, do both at the same time, but how far is it ok for players to express their faith on the pitch?

A new BBC World Service prog on the relationship between faith and football opens this up very well, worth a listen, some insights both on the work of team chaplains, and it invites comparisons with other recent issues over faith in the workplace.

From the FIFA website, on a visit by Sepp Blatter to Moldova.
Next stop was the Orthodox Church, where President Blatter was awarded Moldova's highest honour, that of 'Stephen the Pious, the Great and the Saint', by His Holiness Vladimir, the Metropolitan Bishop of Chisinau and all Moldova. "I am deeply touched by this award. For me, religion and football have at least one thing in common: they bring hope and emotion to the people," said the FIFA President.

that's 2 things Sepp, but we'll let that go. Also from FIFA, in the Equipment Regulations
15.1. All forms of advertising for sponsors or third parties, of political, reli­gious or personal statements or other announcements, are prohibited on all kit items (see Annex A) inside the stadium.

which is fair enough, though some of the most courageous sportsmen in recent times include the Zimbabwean cricketers who used their profile through the sport to protest about the government. It's also a good way to protect the turf for the FIFA designated sponsors and bankrollers.

A few months ago Fifa warned the Brazilian team against displaying religious slogans on the pitch. That doesn't stop people crossing themselves, or dedicating goals upwards, so it seems reasonable. At the same time, money talks, and Fifa is probably quite sensitive to certain parts of the 'market' taking offense: it's not easy to know whether this secular equality or capitalist pragmatism talking. Possibly both.

Deep Church notes that possibly 40m people will listen to the radio programme.
Posted by David Keen at Friday, January 08, 2010