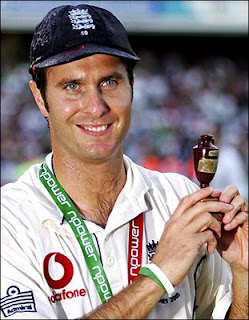 Virtually my only claim to fame is that I went to the same school as Michael Vaughan, and I think for a while we overlapped at the same club (Sheffield Collegiate). Vaughan this morning confirmed his retirement from all forms of professional cricket.

Not surprisingly, tributes have been pouring in from current and former England players and coaches. As an average cricket fan, that 2005 Ashes victory will always be a thrilling memory, and the image of Vaughan despatching Glenn McGrath off the front and back foot in his 633-run feast in Australia a couple of years before is one to swell an Englishmans heart.

Sadly Vaughan has lost his battle with injury, an all-too-frequent story in modern day cricket. Of the current squad, Flintoff, Pietersen and Sidebottom are all recovering from recent injuries, and the mental and physical toll of top level cricket has take out the likes of Simon Jones and Marcus Trescothick for good, to which list we can now add Vaughan.

Thankyou to an England captain who gave us hours of pleasure, and that summer of triumph. I hope that Yorkshire and England give him the send-off he deserves.
Posted by David Keen at Tuesday, June 30, 2009