Hey, I've just thought of a really great advertising slogan for Christians to put on buses! 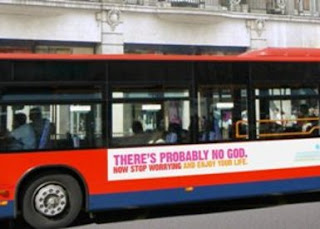 Someone must have got to work on this picture in Photoshop by now......

Even more jaw-droppingly, Dawkins told me that, rather than believing in God, he was more receptive to the theory that life on earth had indeed been created by a governing intelligence – but one which had resided on another planet. Leave aside the question of where that extra-terrestrial intelligence had itself come from, is it not remarkable that the arch-apostle of reason finds the concept of God more unlikely as an explanation of the universe than the existence and plenipotentiary power of extra-terrestrial little green men?

Melanie Phillips, on a debate between Richard Dawkins and John Lennox in Oxford this week. (Ht Mark Meynell). Lennox's book, 'Gods Undertaker' is a systematic, detailed, scientific (sometimes too technically scientific for this layman) demolition of Dawkins atheism - I'm most of the way through it at the moment, and it really is worth reading if you're interested in what Dawkins is saying. Reviewed here. You can watch a different Dawkins/Lennox debate here.

Update: a couple of links:

link to the full-length audio of a previous debate between the two at Critical Mass.

No sign of a video or audio of the Oxford debate yet.

Update Updated: Richard Dawkins has told More4 news that he's going to spend his retirement writing a book on whether fairy tales damage children. (also reported in the Telegraph, where he's identified as 'Prof Hawkins'.)

"I plan to look at mythical accounts of various things and also the scientific account of the same thing. And the mythical account that I look at will be several different myths."Of which the Judeo-Christian one will just be one of many. And the scientific one will be substantiated, but appeal to children to think for themselves; to look at the evidence. Always look at the evidence."

So the scientific account will be 'substantiated' but the Judeo-Christian account presented as 'myth'. Well, with such a fair and unbiased starting point, the little dears will clearly be persuaded of the merits of objective study. That's before they go home and burn all their Disney stuff (no bad thing in itself), fairy stories, poems, in fact, anything which involves the use of the imagination. But I hope Dawkins looks at the evidence, and if he finds that kids who are taught the Christian story are happier, healthier, more fulfilled and better citizens, then he'll come out in favour of it.