The Winebibber - an Appreciation 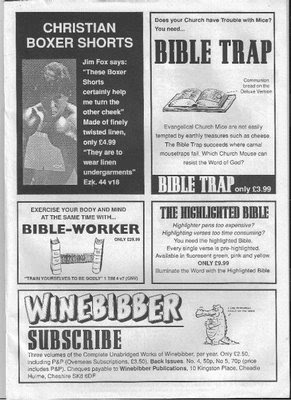 Feel stirred by a comment from Matt Wardman to out myself as a fan of the Winebibber, a Christian subculture comic styled on Viz which was around in the late 80s and early 90's. Sadly pre-digital, so you can only now get it in brown paper bags at Greenbelt, but there is a Winebibber Facebook site. Dave Lynch gives a summary of what was in it - worth browsing the rest of his site for some v. clever photo editing!
For some balance, it's panned as 'fundamentalist' and 'dismal' here.
For anyone born after 1980, Winebibber is what comics used to be like before they became £4 merchandising vehicles for Disney and TV programmes. Staple characters were failed charismatic 'Robin Mire, He's Not on Fire', a family who conversed in tongues, and Gordon Bewes, the stick-figure man from the Good News Bible illustrations, who has a running feud with King James.
My personal favourite was the prayer section, including the Prayer for Everything ("Lord, please help everyone, everywhere, whatever they're doing") and the rewritten Serenity Prayer ("Grant me the senility to accept the underwear I cannot change, the courage to change the underwear I can, and the wisdom to know how long I've been wearing them for")
Here is a sample page. Thought it might interest at least one of my fellow bloggers, especially that advert top right... More pics at the Facebook site.
Posted by David Keen at Saturday, July 18, 2009