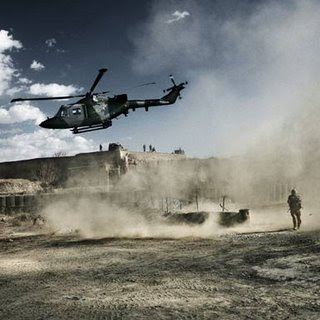 Following yesterdays competition on the ferries, it's time to take to the skies. Westlands Helicopters are the major employer here in Yeovil, with thousands working there and at suppliers in the Yeovil area. Hundreds of folk in our parish work there.
Helicopters would be a safer way of transporting troops to the Afghan war zone, avoiding roadside bombs. But money is tight, and the Forces have only so many helicopters available. The MoD currently has a contract with Westlands for more 'Future Lynx/Wildcat' helicopters. These will be delivered in several years time. Several of the current crop of Lynx's were sent home from Afghanistan because they don't work in local conditions, so an upgrade is clearly needed.
Douglas Carswell, MP for Harwich and Clacton, argues that the Future Lynx contract needs to be scrapped in favour of a Sikorsky contract, as the latter delivers better value for money, and more quickly.
Yeovil MP David Laws is "furious that once again this senior Conservative MP is trying to sabotage the crucial £1bn contract for the Future Lynx helicopter...

It would a disaster for both the armed forces and for South Somerset if there was any attempt to stop Future Lynx from proceeding. It is essential that Future Lynx goes ahead, to replace the existing fleet of Army and Navy Lynx helicopters."
The Conservatives are, in turn, 'furious' with Laws for suggesting that scrapping Future Lynx was Conservative policy, and that Douglas Carswell is a 'senior' figure in the party. He had a hand in putting together the 2005 manifesto, but doesn't hold any official party position. Nick Clegg has, however, been picked up by the Yeovil Tory candidate for a radio comment about buying helicopters from the USA.
Meanwhile LabourHome reports that, for all the rhetoric, the Labour government has done precious little to purchase new helicopters for immediate use in the meantime.
For more detail about the background, try Defence of the Realm, who doesn't rate Future Lynx at all, and thinks that the decision is down to forces and party politics and lobbying, rather than actual need. Plenty of stuff in the comments there too.
Issues
- Is this a case of 'British jobs for British workers', and if so, is that in conflict at any level with 'British lives for British soldiers'?

- Is there an issue here between the Army and Navy. How joined up is the thinking? There seem to be different rules and needs for different parts of the armed forces.
- What is the official Libdem policy? David Laws is spokesman on children and education issues, not military.
- If you are a local MP, (or even, a local vicar) it does make it a heck of a lot more difficult to be objective. David Laws' future in Parliament is over if he doesn't publicly side with Westlands. I'm deeply uncomfortable with anything that's made for the prime function of killing people, but at the same time I'm concerned about people's livelihoods and the wellbeing of my community, so I would probably raise more questions about Westlands if I lived elsewhere.
- Forget personalities for the moment. Forget which party everyone belongs to. Is Future Lynx the best option on the table for what the armed forces need? Should commercial interests - as with the decision to sail to the Isle of Lewis - have any say here, and if so how much?
This is an area I venture into at my peril (not literally, at least I hope not), but if you don't ask the questions you don't get the answers. Here in Yeovil, Westlands is top trumps, but if you think it's just a local game of cards, ask Michael Heseltine.
Posted by David Keen at Tuesday, July 21, 2009