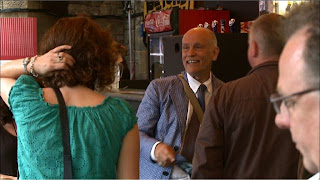 A few days ago John Malkovich took to the Edinburgh streets to leaflet for a play he's involved in at the Fringe. A (sadly) paywalled pic shows him standing slightly folorn in a sea of Scots waiting for someone to take an interest.

At the end of a seminar on the Dead Sea Scrolls at New Wine (yes, you read that correctly) Crispin Fletcher-Louis commented that "God has come down off the stage and is mingling with the audience." His point was that in declaring the Kingdom, Jesus was taking a whole load of things that were supposed to happen in the Temple and bringing them right to people's doorstep: worship, forgiveness, God's presence and glory, etc. It's great that a famous actor is happy to mix it with ordinary people in the streets (though hey, why shouldn't all famous people do that, instead of living in Wilmslow or Virginia Water?) to spread the word about his own creation. It's even greater that Jesus did pretty much the same.

And many people walk past, head down, palm raised, mumbling 'no thanks'. If we just looked up for one moment to see who it is....
Posted by David Keen at Monday, August 08, 2011