If Only We'd Listened to Rowan

From that New Statesman editorial back in June:

"I don't think that the government's commitment to localism and devolved power is simply a cynical walking-away from the problem. But I do think that there is confusion about the means that have to be willed in order to achieve the end.
If civil society organisations are going to have to pick up responsibilities shed by government, the crucial questions are these. 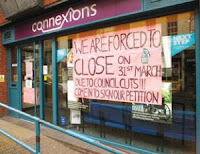 - First, what services must have cast-iron guarantees of nationwide standards, parity and continuity? (Look at what is happening to youth services, surely a strategic priority.)

- Second, how, therefore, does national government underwrite these strategic "absolutes" so as to make sure that, even in a straitened financial climate, there is a continuing investment in the long term, a continuing response to what most would see as root issues: child poverty, poor literacy, the deficit in access to educational excellence, sustainable infrastructure in poorer communities (rural as well as urban), and so on? What is too important to be left to even the most resourceful localism?"
The Coalition response back in June, in a time-frame so rapid it could almost be called 'knee-jerk' (© Ed Milliband) was fairly dismissive. Perhaps Nick Clegg should invite the AB of C to contribute to the latest government listening exercise.

I heard earlier this week of similar problems at the other end of the age spectrum. The resources available for home visits and support for the vulnerable elderly are drying up. It may be that an army of well-meaning volunteers steps into the breach, or simply that people rediscover what it means to be a good neighbour.
But these folks aren't going to riot to draw national attention to themselves (where do octegenarians riot anyway? Boots? Pilates?) Here too, there need to be 'cast iron guarantees of standards and continuity'. But will the vulnerable elderly get this, or does someone need to start kicking off about it?
PS sorry about the font, seems to have a mind of its own.