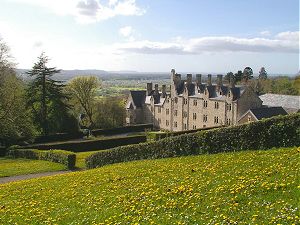 The higlight of my recent sabbatical was a week at St. Beunos, a Christian prayer retreat in North Wales. It's run by the Jesuits, a Catholic order, and featured on The Big Silence, a BBC programme last autumn. As a result of the programme, their retreats are booked out for the whole of this year.

At the heart of the prayer retreat was a 45 minute chat with a spiritual director, who would suggest some prayer exercises for me to do each day. One of these would involve meditating on a Bible passage by imagining my way into it: to identify a character in the story and imagine being in the story from that persons perspective, or simply to imagine being in the story myself. Another would be an imaginitive prayer exercise: on a couple of occasions I was encouraged to 'go for a walk with Jesus'. That meant arranging a time and place to meet Him, and to imagine throughout the walk that Jesus was physically next to me. I ended up opening gates for Him, walking to one side so that there was space for both of us on the road (the roads are narrow in North Wales!), and adjusting my speed when I sensed I was 'losing' Jesus by walking too fast.

I found all of this very fruitful, whilst being aware that I rarely have the leisure in prayer to simply use my imagination. It's much more controllable to pray set prayers, work through a list of things to pray for, and formulate my own prayers, rather than let my (rather more chaotic) imagination run the show.

As an evangelical, I'm trained to base prayers on reason. God is found in the Word, in the left brain, prayer is based on who God is (revealed in words) and what God has said (ditto), and is verbal. Ignatian prayer is more 'right brain', and uses the imagination. Both reason and imagination can be flaky, and I came back from the walks wondering whether I'd been for a walk with Jesus, or just imagined I'd been for a walk with Jesus. Then I wondered whether perhaps both had happened, and it didn't have to be an either/or.

Now when I pray, I'm finding it increasingly helpful to identify where Jesus is in the room (yes, that sounds odd), so that I can talk to him, rather than formulating sentences in my head and hoping they're going in the right direction. And I'm still working all this out. But in my head I can hear the spiritual directors Polish accent saying 'where are you Lord?' and it's now a question I like to ask Jesus regularly. Trying to discern where Jesus is so that I can pray, and where Jesus is in the things of the day, is all pretty new, but it also seems to have some 'life' to it. I went on sabbatical with a key goal of rediscovering my relationship with God, in a way that wasn't bound up with my identity as a vicar, and I think God's answered that prayer.

Now as I read through all this, I wonder if it would have made sense to the me of 4 months ago, and I don't really know!!
Posted by David Keen at Monday, August 15, 2011