Nintendo Wii: My Sims - Introducing your 3 year old to occult and voodoo 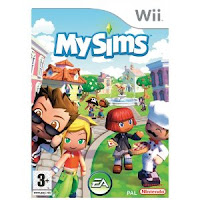 My Sims: it looked like a good game for our kids to play in the summer hols on the Wii. Create a character, build a town, watch a community develop, unlock various levels, etc. etc. So far so good.
Then we unlocked 'level 3', and some odd things started going on. In My Sims, the characters who move in to your town each have a main characteristic: there are 6 to choose from. Fun, Tasty (food), Cute, Studious and Geeky were fine, Spooky we just avoided. The trouble is that if you get Spooky characters living next door to each other, guess what? They hold a seance. And they invite you to join in.
That's right. This is a game which, according to the box, is suitable for 3 year olds upwards. And the characters in it are getting together around an ouija board to contact the dead - and succeeding. Following the seance, a ghost moves in. By the looks of it, you can do this in other My Sims spin-offs, like Kingdom or Agents.

But just in case your kids aren't having nightmares by this stage, or learning what fun it is to try to contact the dead, they can go prospecting in the 'desert' area. There, they'll find among other things voodoo dolls (scroll down to the 'scary' essences). Now these may have had a makeover since I last heard of them, but the basic idea of a voodoo doll is that through torturing the doll, the person it represents is themselves tortured in a way which mirrors what you've done to the doll. Again, a lovely idea for a 3 year old to take on board.

Once I've got over the outrage, shock and sheer disbelief at this idiocy, I'll be writing to Nintendo, though I'm sure (I hope!!) that I won't be the first. It's pretty sick to have a major global brand aiming games at toddlers which normalise playing with the occult, and activities which can lead to all sorts of spiritual messes. Woe to those who cause one of these little ones to stumble.
Posted by David Keen at Thursday, August 25, 2011