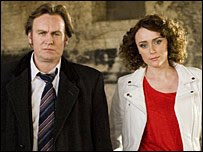 "Do you remember a guy that's been
In such an early song
I've heard a rumour from Ground Control
Oh no, don't say it's true
They got a message from the Action Man
"I'm happy, hope you're happy too
I've loved all I've needed to love
Sordid details following" (David Bowie 'Ashes to Ashes')
Great news that Ashes to Ashes is to get a 2nd series. After a slightly uneven opening - ropey Miami Vice pastiche versus 80's soundtrack overdrive - it's settled down into compulsive viewing, as Life on Mars was before. The central mystery of Life on Mars - mad, coma or back in time - has been replaced by the will-they-wont-they of Alex Drake and Gene Hunt. We know she's in a coma, trying to find the trigger event in her subconscious that will get her out of it and back to real life in 2008. We also know now that the car bomb that killed her parents wasn't that trigger event.
The whole series has been buildling up to this, and there were some great twists. In between Alex driving a pink tank over a parked car, and Lord Scarman getting locked in a cell with dozens of Gay Pride marchers, were Alex's desperate attempts to stop the bombing taking place - take out the car, take out the murderer, take out her parents, yet in the end it still happened. The scene where her dad suddenly became The Clown, the Death figure of the series, as the bomb went off, was superb. Watching the credits, we wondered why we'd not spotted that the same actor played both characters....
One big question is whether the things Alex is 'discovering' in 1981 are all in her imagination. Did her mother really have an affair with the family's best friend? Did her dad blow himself and her mother up in a car bomb? Was mum about to quite work to spend more time with her daughter because she loved her so much? Or is this all cobblers, the fevered wishful thinking of a dying mind? At least we'll be spared all those embarassing Alex & Mum emoting sessions now....
Questions for the next series:
- the obvious one, about Alex & Gene
- what will happen with the secret file which Gene stole from the security bunker and locked in his desk?
- will Alex pray? Given the Sunday school background that the first half of series one sketched in, will we get any more of this?
- what happens with David Threlfalls creepy villain?
- do we get more of Lord 'I'll be keeping an eye on you DCI Hunt' Scarman? Hope so.
Can Alex be Saved?
In terms of spiritual parallels, I couldn't help watching Alex Drake and thinking of lots of Christians I've come across. Not for the outfits, but for her attitude. Here is someone who only cares about the world she's in so far as it helps her to escape it, and be 'saved' to somewhere else. She speaks a foreign language to the people around her, spouting psychobabble at every opportunity, and making little effort to explain her language or behaviour. Is Gene's thuggery, or Alex's selfishness, the worse sin? Had she been ugly as well as obnoxious, she wouldn't have got very far. Part of her journey is learning to care about the world she finds herself in, rather than despising it, and the people in it. By the end of the series she faces a challenge - do I continue to live for the future, or do I live in the present?
As Christians it's very easy to spend so long in another world - the Christian cultural bubble - that we find it hard to talk about faith with people who don't live in the bubble with us. I think the church is miles better now at being positive about the world around it, and brings an approach of care and engagement rather than condemnation and superiority.
In the end the greatest commandments are to love God, and to love others. It's not about 'my' salvation, or about other people being a means to our ends, it's when we truly love and care about others more than we care about our own salvation, that's when we're ready to go home. And that's when we realise why we're here.
Posted by David Keen at Tuesday, April 01, 2008

Email ThisBlogThis!Share to TwitterShare to FacebookShare to Pinterest
Labels: Ashes to Ashes, TV