Yeovil welcomes Richard Dawkins this evening to the Octagon Theatre - at the time of writing, sales for the matinee Salvation Army Christmas Carols are running well ahead of those for Dawkins, with less than half the £6 seats sold. It's maybe that sense that people still don't get it which drives Dawkins latest book. Glossy, packed with graphics and 'quirky' illustrations, 'The Magic of Reality' is yet another go at persuading people to ditch religion and embrace evolutionary science. Mind you, at £20 for the book folk maybe think they've spent enough. (Interesting that a full house spent much more than £6 a head to hear Marcus Brigstocke riffing on God questions for a night in Yeovil, can we only take information if it's packaged as entertainment? )

The thing is, it could just be a very good science book. Dawkins is good at science, it's his expertise. But it's trying to be a book on (i.e. against) religion. And it doesn't do very well. For example:

"To say that something happened supernaturally is not just to say 'we don't understand it' but to say 'we will never understand it, so don't even try' ". Well, no. People have been pointing out for years that science and religion offer different levels of explanation of the same phenomena, just as a brain scientist will describe what's happening in my head right now differently from my description as the person with the head in question. I can believe that God is the prime agent in creation, but still be staggered and enlightened by the detail science discovers about the process. Loads of scientists have understood what they do as 'thinking God's thoughts after him', and seeking understanding doesn't run in conflict with faith.

Another example: Dawkins retells various creation myths about the human race, before giving the scientific account. This presumes that creation myths and science are trying to do the same job. But are they? The early chapters of Genesis are richly theological, they do a lot more than say 'here is the sequence of events, there, Biblical science 101 lesson over'. The most important question they are dealing with is probably not 'in what order and how long ago were things made?' but 'is the universe orderly or chaotic?' 'why is there suffering?' 'what's wrong with us?' 'what does the good life look like?' questions of meaning, purpose and identity. This is what 'myths' do. To compare them directly to the scientific account as if they were equivalent texts doesn't do them justice.

And finally "If something happens that appears to be inexplicable by science you can safely conclude one of two things. Either it didn't really happen, or we have exposed a shortcoming in present-day science." (p264). Now there's a faith statement if ever there was one. And it's ridiculously over the top. I fell in love with my wife and married her. Can science offer an explanation of that? Sort of, but only a very thinned down mixture of chemistry, psychology and random probability. It doesn't explain what actually happened. The scientific account is inadequate, we need other levels of explanation to truly do this justice. There are also several remarkable events in the way we ended up together: there might be a scientific explanation for the dating of the Anglican lectionary, population shifts in Shepton Mallet etc., but 'that was all just coincidence' isn't actually very convincing.

Reviewers of 'The God Delusion' have pointed out in numbers that Dawkins grasp of theology is shakier than his grasp of science. So what is he actually trying to do?

- he's clearly passionate about science, and doing what he does best, telling the story of the scientific worldview. It's interesting in itself that Dawkins uses story and graphics to try to grab the readers attention (also done well in Bill Brysons 'Short History of Nearly Everything'). The left brain is trying to get the right brains attention.

- Dawkins sees religion - all types of religion - as opponents of science, and repeatedly tries to hammer home the point that any religious account of reality is wrong, because it's not scientific. At the same time he tries to expound the 'magic of reality' - that we can get all the sense of wonder and awe we need from what science tells us. So he is trying to fill the 'God shaped hole' with a scientific alternative.

There are two problems with this:
a) The 'religious' account of reality is not trying to be scientific. It's a different, and complimentary, level of explanation.
b) the scientific replacement for religion doesn't itself do the job. I know of people who've found in God a level of meaning, purpose, grace and identity they never found in science. I know of another, troubled, individual, for whom none of the answers Dawkins offers would do any good. There is a reason why so many of us are 'superstitious', and it's not just evolution. I was reading the other day about the founding of Alcoholics Anonymous, and how a theistic recovery programme for alcoholism has worked for many people in a way no secular approach has ever done.

There's a lot of 'magic' which does need debunking, and I would love Richard Dawkins to share a stage at the Octagon with the clairvoyants and occultists which have been such a regular feature at the place in recent years. There is bad religion, and there's bad science too. And good magic.

And of course, scientists themselves aren't all agreed about reality, as the following graphic irrefutably demonstrates: (ht labspaces, original here.) 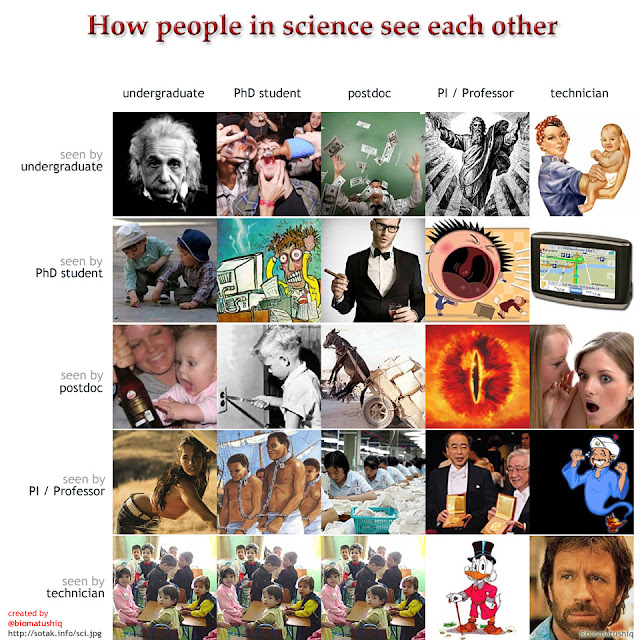