Those of you fluent in ancient Hebrew will rejoice that several of the Dead Sea Scrolls texts can now be viewed online. 5 of the scrolls, including the amazing full text of Isaiah (a find which pushed back the date of the oldest manuscript of Isaiah by 1000 years) can be viewed here, courtesy of the Israel Museum, in collaboration with Google. 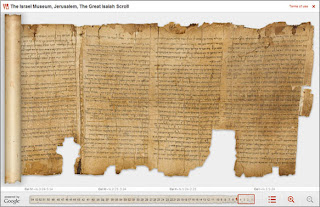 For those of us who aren't fluent in ancient Hebrew, there's some very helpful commentary explaining the background to the texts, how the Biblical versions came together, and there's a verse by verse translation, so if you click on a verse in the viewer, a translation box pops up. The non-biblical material about the Essene sect fills in some of the background to the Jewish worldview around the time of Jesus, with texts which actually date from this period.

Thankfully those daft suppression conspiracy theories that used to swill around are now only the stuff of Dan Brown novels, and these finds are also impressive evidence for the textual accuracy of the Bible. Despite a gap of 1000 years between the Qumran manuscript and the other manuscripts used by translators, there aren't that many significant differences - those that exist are mainly to do with the process of copying, rather than the text being embellished over the years by people with an agenda. The site explains "The version of the text is generally in agreement with the Masoretic or traditional version codified in medieval codices, such as the Aleppo Codex, but it contains many variant readings, alternative spellings, scribal errors, and corrections".
This vid explains a bit more:.