Brewers Left With No Room for Manoevre 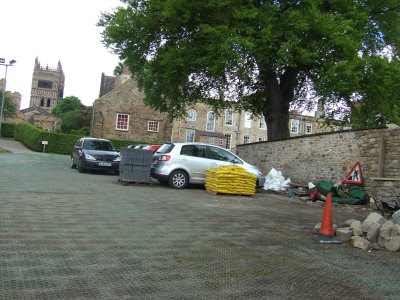 Having formerly been a vicar in Darlington, one of my many contacts in the North-East pointed me to this photo, which is, allegedly, Phil Brewers car (brother of Mark Brewer, and, until recently, co-owner of the Society of Stephen the Great 'charity'), parked near a landmark building somewhere in the North-East of England. Maybe he forgot to pay for the parking place, which would be true to form, as the Brewers have also forgotten to pay wages, pension contributions, agency staff, and pretty much anything else they could get away with. Allegedly.

I could have told him Durham was hot on parking round the Cathedral, but his brother never replied to our letters....

If, as is suspected, the car belongs to SSG, then it's an asset which now belongs to the Charity Commissioners. I suggest with all the storms recently they put it into storage before it gets struck by lightening.

For the latest on the former SPCK bookshops, go here. In 3 weeks time it will be a year since the Brewers tried to silence Dave Walker. No Mark, we've not forgotten, and we'll keep you and everyone else aware of your sins until you repent of them.
Posted by David Keen at Wednesday, July 01, 2009