New Kids on the Blogroll

Several new blogs added to my bookmarks recently, so for your delight and delectation (or derisive cries of 'how come he's not noticed that one before?')...

Two Church Mice: new blog by John and Olive Drane. John Drane wrote The McDonaldisation of the Church, in case you're trying to place the name, and also passed my Mphil dissertation, which was nice of him. They say: this blog will be about dreaming dreams, imagining visions, and speculating on what might be if the Christian message is to be authentically contextualized in the culture we know best - which, of course, is not narrowly Scottish, or British, or even western, because we also all live in a global village.

The Blue Fish Project blog on mission, preaching, and a bit of a Clapham Junction of links to wider Christian blogland. None of the kind of frivolous nonsense you get here, and consistently thoughtful.

J R Woodward - linked there a couple of weeks ago for his awesome online mission primer, but he has plenty of other stuff to say too. Covers mission, culture, quotes, book reviews, theology etc.

Dave Male has also recently started blogging, he's a Fresh Expressions leader and practitioner, and blogs some of his own talks and presentations, and issues around leadership, new forms of church, mission and community.

Castle of Nutshells is subtitled 'evolving theology and creeping faith', and covers a fascinating variety of topics. Love the title.

Meanwhile Bishop Alan has awarded me an, um, award: here it is - 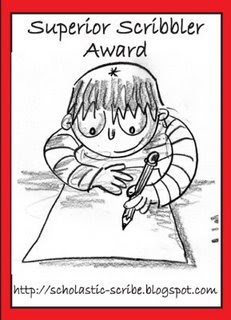 I guess this is like a meme, but with virtual sweeties as an extra incentive. The award was invented by the Scholastic Scribe, and basically invites you to choose your 5 'most deserving' blogs, and bless them with the award too, who then in turn.... you get the picture. Here are the 'rules':

1. Each Superior Scribbler must in turn pass The Award on to 5 most-deserving Bloggy Friends.

2. Each Superior Scribbler must link to the author & the name of the blog from whom he/she has received The Award.

3. Each Superior Scribbler must display The Award on his/her blog, and link to This Post, which explains The Award.

4. Each Blogger who wins The Superior Scribbler Award must visit this post and add his/her name to the Mr. Linky List. That way, we'll be able to keep up-to-date on everyone who receives This Prestigious Honor!

5. Each Superior Scribbler must post these rules on his/her blog.

So (drumroll), I'd like to award the Superior Scribbler Award to....

Phil Groom: for his courage in calling Mark Brewers bluff on his legal threats, and dedication in continuing to blog about the increasingly sad saga of the former SPCK bookshops. The potential charge list against the new owners seems to grow by the week, and Phil has led the line in keeping this issue in the public domain.

Archdruid Eileen at The Beaker Folk of Husborne Crawley. Mad, bad or tongue-in-cheek? You decide. The cyber-coenobitic community for the 21st century - and now with added tealights! More traditional than Celtic Christianity (like that's hard...); more Arran Sweaters than the Highlands and Islands; more facial hair than a convention of Dubliners fans (and that's just the Archdruid). With the exception of Ship of Fools, there hasn't been any decent Christian satire in the UK since the sad demise of the Winebibber, but now there is a tealight at the end of the tunnel.

Steve Tilley. Whilst people like me tend to wander blogland looking for other people's stuff to comment on/repost/argue with, Steve is very much his own man, and I love his originality and honesty. It was reading his blog which first gave me the idea of starting this one.

Sunday Papers a co-operative youth/mission blog which never ceases to be original and questioning.

And Dave Walker because it's all his fault that I got into this SPCK stuff in the first place. He took a big hit on behalf of a lot of people back in July, when Mark Brewer threatened him with court action for reporting the truth about the new regime at the former SPCK bookshops, and 507 of us (last count) have signed up on Facebook to support him. So I'm giving the award to him because without the profile and consistent probing which he gave to this issue, people like me and dozens of others wouldn't be on the case now.
Posted by David Keen at Thursday, December 11, 2008