There's Probably No Bus either 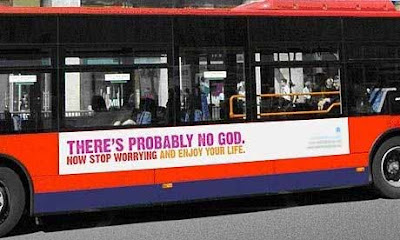 The Agnostibus campaign has gone national (it's a bit of a misnomer to call it the 'atheist bus campaign', given the slogan itself ), with £140,000 and 800 buses carrying the message to the nation, and 1000 ads on around London underground. I just love the idea of a commuter crammed like a sardine into a sweaty airless carriage thinking 'of course, the reason I'm not enjoying this is because I'm not an atheist, and the reason I'm worrying isn't because my company is about to go bust, it's because I paid too much attention in my church school assemblies'. With the debt crunch, the timing is deeply ironic.

It's been welcomed by various Christian groups, including Theos . I can't work out if they're just teasing, doing a 'love your enemies: it messes with their heads' thing, or whether they geniunely believe that more people will start thinking about issues of God and faith as a result of this. We could do with a few of the Christians also pointing out that everything in the statement is wrong, or misleading.

Well worth a read is this piece by Nick Spencer:
Let's leave aside the adverts' basic proposition, "There's probably no God". Where did that "probably" come from? It doesn't suggest the sales staff is overly confident about its product. If my pilot told me "This flight to Paris probably won't crash," I'd think about taking the train.

And let's leave aside the advice, "Now stop worrying and enjoy your life". You would have to go a long way to find a slogan less suited to our New Year, recession-looming, mass-unemployment gloom. The truly wonderful thing about the campaign is that it does that most un-English thing. It mentions God in public.

I wonder how long it will be before we get bus drivers careering round corners at high speed and calling back to their passengers, as they cling despairingly to the nearest solid object, 'stop worrying and enjoy life!'


And: if you're a Christian (or Muslim, or...) bus driver, what do you do if you find the advert plastered down the side of your bus? Did any atheist drivers object to carrying Alpha ads?
Posted by David Keen at Wednesday, January 07, 2009