When Should My Parish Church Be Demolished? 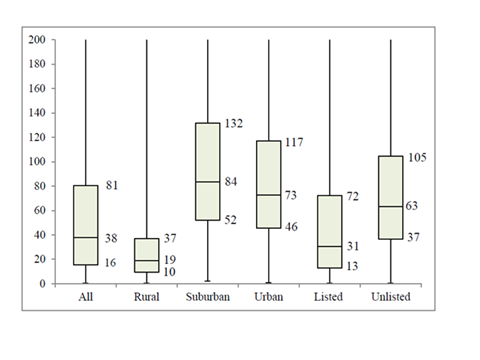 There, I trust that picture makes perfect sense.

Alright then... the CofE (not before time) has just launched a major report and review into the use, upkeep and management of its 16000 church buildings. Nearly half the Grade 1 listed buildings in the country are Anglican churches, and many of those are in rural areas, with small populations and even smaller congregations.

The chart above, from the full report, illustrates the big presenting issue. Each vertical line represents a set of the 16000 churches. The line & value in the middle is the average congregation, and the upper and lower lines are the 75th and 25th percentiles. In other words, 25% of CofE congregations are larger than 81, and 25% are smaller than 16.

Outside the CofE, I'm not aware of many groups with a membership of 15 who own their own premises, let alone own premises which are grade 1 listed.

It's even trickier in rural areas. 25% of the congregations there are in single figures, and another 25% are between 10 and 19.

Putting the buildings on the back of a truck and shipping them to where they're needed (new housing estates, replacing urban churches like my own which are now too small for a growing area and congregation) isn't really an option. So far we have muddled through, but the dead stones need to serve the living stones of the church, not stifle them.

If the local church becomes a fundraising body with 'keeping the building open' as its top priority, it is no longer the church Jesus Christ came to establish. Marshall McLuhan observed that we shape our tools, and then our tools shape us. In many places the church (i.e. the people) is being forced out of shape by premises which may be beautiful and soaked in prayer, but are a burden more than they are a blessing. Any local church which couldn't conceive of its existence without a church building would be best served by losing the building anyway. Once masonry (of either sort) defines a church, it's in serious trouble.

There's an open consultation running for several months, and a few ideas already being floated. My fear is that it could turn out much like government planning law: lots of people agreeing in principle that 'something must be done', but hardly anybody wants it done here. At the other extreme, we don't want a Beeching-like cull that destroys all the branch lines.

PS I wonder if there is any causal relationship between a church not being listed, and it having a bigger than average congregation? It would make sense....

update: helpful piece from Ian Paul.
and another from the National Churches Trust.
Richard Chartres lecture on the Diocese of London, reported here a few days ago, talks about creative uses of church buildings in urban settings. The report and consultation is maybe a chance to think more creatively than 'keep them all open at whatever cost' or 'close them all down'.
and quite a bit on the mixed blessing of buildings in this sermon by the ABofC