Raise Money by Giving it Away 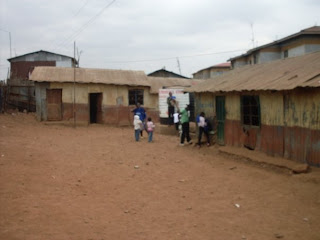 Around this time last month, we gave away £5 to everyone who came to our Cafe Service. That included first-time visitors, and children. The idea was to multiply the money during the next month, and then bring it back.
The challenge was to help raise £20,000 to build a new school in the Kibera slum in Kenya. Kibera is an area of 2 square kilometres, home to 1 million people. The average home is 3m x 3m (measure it out) and has an average occupancy of 5 people. The current school (pictured) is about to be knocked down to make room for a road and railway line. There'll be no compensation, and 200 kids will be without a school. In the UK it would cost £2-3million to build and equip a school for them. In Kibera, a local church has secured the land, and the cost will be a tiny fraction of what it would be here.
In September we gave away 57 envelopes, £285 in total. Yesterday, 38 of those came back, containing roughly £1300, a net gain of £1100. Cake sales, horse-naming competitions, marmalade-making, video nights, workplace collections, neighbourhood pub quizzes and home made cards, and a great sense of pride at what people had been able to achieve. Several other fundraising efforts are ongoing, including a sponsored half marathon, so I'm hoping that when it's all back in, we'll have raised £2000 or more.
This adds to roughly £500 raised at a conventional collection last week at our Harvest service towards the project. Interesting that giving money away has been up to 4 times more effective than simply asking for it!!! (though that's probably not a fair comparison! And it's not the kind of thing you can do every week).
It's amazing to see how motivated people have been, and how much they've enjoyed doing something for a good cause. Having a specific project has really helped. Two local schools are now interested in further links with the project.
Where did this all start? With one member of our congregation seeing an advert for a short-term mission trip to Africa, and deciding to have a go. She did a presentation to the church at the start of September, and everything else has kicked off since then. It's a great lesson in the power of the individual, and in creative fundraising which engages people's talents and interests.
One other trick: we gave the money away to the congregation with most 'fringe' members. Our Cafe Service has a regular congregation, but many only come to that, and nothing else. Result: most of their contacts for fundraising are outside the church, rather than inside it. That created a much bigger pool of money to fish in.
Posted by David Keen at Monday, October 12, 2009