The Magic of Shepton Mallet

Update: here's a Times piece on the archaeologist who found the original amulet, which puts the case for it being genuine. So I'm very confused now. But I still don't like the building they named after it.

A supposedly 4th century Christian amulet, found in Shepton Mallet, has been exposed as a fake. I mention this because I used to live there. The amulet was found in 1990, and is now thought to have been planted by protesters opposed to the building of a warehouse.

I was bemused by the following comment from the deputy mayor: “It’s like the magic has been removed from Shepton Mallet". Sorry? Here's a picture of Shepton 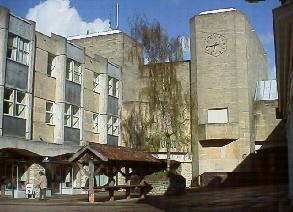 notice the nice old market stall thingy in the front, completely dwarfed by the concrete monstrosity behind it. The monstrosity was named 'The Amulet' to commemorate the finding of the historic piece. Maybe now, to recognise that it's a fake, they'll pull it down to reveal a very nice view across to Shepton's ancient parish church from the market square. That would save them thinking up a new name.

To be fair to the place it does have these very nice gardens. And a prison. And a brilliant rabbit-warren of a furniture shop opposite the 'you could be anywhere in the country' retail park, built over the rubble of the Clarks factory where I used to work. Actually, since Clarks paid people on piecework - a dehumanising and corrosive practice - the retail park is probably a nicer place to work.

It's a lovely place really, they've just not been blessed with the best town planners.
Posted by David Keen at Tuesday, September 23, 2008