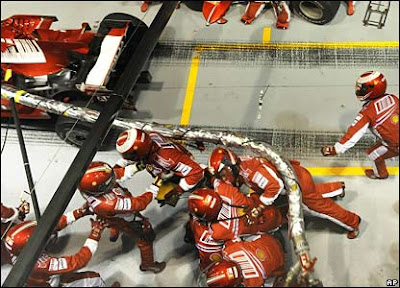 This is Felipe Massa, playing hose skipping with his Ferrari pit crew in Singapore yesterday, all of which gave Lewis Hamilton the 7 point lead over Massa he would have had anyway if it weren't for the harsh penalty he was given at the last Grand Prix.
I think it's the first time we've watched a Grand Prix all the way through, mainly because we were hoping to catch sight of our cousins in the crowd. More importantly though, England have announced their cricket squad for the tour of India. And staying with sport, the Diocese of Lichfield have been advertising their churches in football match day programmes. 4 out of the 5 teams with the advert won (Wolves, Walsall, Shrewsbury and Burton Albion), so I'm not sure what that says about Stoke City, who were no. 5. And lost.
You can see why a football crowd might be seen as a good target for the advert. After all, here is a bunch of people who assemble in the same time & place every week (unless Sky are showing it, in which case the start time is anybody's guess), use singing and responsive chants, and are used to uncomfortable seating. Far more radical would be to build up a Christian community within the football club.
Posted by David Keen at Monday, September 29, 2008