Toxic texts and Christian-Muslim relations. In Dorset, of all places.

a couple of events coming up soon at nearby Sherborne Abbey, as part of their Insight programme. Venue is the Digby Hall in Sherborne, and I think you have to pay a few quid, but should be worth it:

War in the Old Testament

Wednesday 19th June 2013, 7.30 PM
The Bible is the source of many much loved Sunday School stories, David & Goliath, Samson, Adam & Eve and others. But there is a darker side. Do genocide, ritual mutilation and retributive justice have any place in a Christian book? In this lecture Casey Strine will discuss parts of the Bible many Christians prefer to avoid, including the war narratives of Joshua and Judges and the polemic of some of the Psalms. 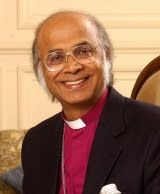 God in Muslim-Christian Encounters:
Are we talking about the same thing?

Bishop Michael is amongst those church leaders who have argued most strongly for a clear understanding of the differences between Christianity and Islam. He was General Secretary of the Church Mission Society 1989–1994 He was appointed Bishop of Rochester in 1994, and in 1999 entered the House of Lords as one of the “Lords Spiritual”, the first religious leader from Asia to serve there.
He retired as Bishop of Rochester in 2009 to take up the role of Director of the Oxford Centre for Training, Research, Advocacy and Dialogue.
Posted by David Keen at Tuesday, June 11, 2013