Diocesan Attendance 2001-10 for adults and children.

Here are the tables for adults and childrens attendance for the 2001-10 decade, based on 'average weekly attendance'. The original data is here on the CofE website and was published last week. I blogged the chart for the combined 'all age' figure yesterday.
First the adult attendance. Some headlines:
1. Only 6 out of 43 Dioceses saw an increase in adult numbers. But that's an improvement on the 1990s when London was the only one, and it's good to see that London is still growing (though more slowly)

2. The overall picture is still of shrinkage, but more slowly than in the 1990s, when the average Diocese was losing 12-15% of adult members, and the worst lost 28% 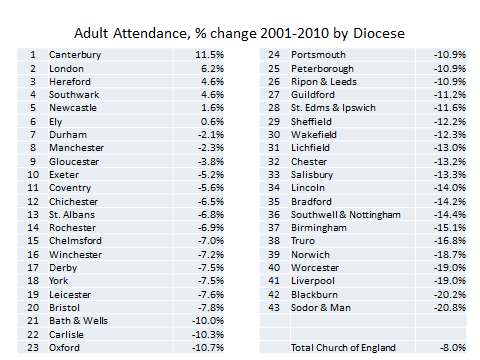 Now the childrens chart. This is better:
1. 15 out of 43 Dioceses have seen growth here. It would be interesting to correlate this to spending from the money released by the Church Commissioners for mission. Quite a lot of this has gone on local children and families worker posts, are we seeing an effect? (and if so, would we see an effect if we released lay ministry into other age group specialisms, like the over-65s?)
2. The overall numbers here are smaller to start with, so change is generally more volatile, hence the bigger percentage swings compared to the adults.
3. This is an even more significant improvement on the 1990s, when only London saw a rise in numbers, and that was fairly small (4%). To put it in perspective, my own Diocese, Bath and Wells, which is 23rd in the table, would have been 5th in the 1990s table on these figures.
4. But we are seeing the virtual disappearance of the CofE presence among children in some places. Blackburn and Liverpool now have around 45% of the under-16s they had 20 years ago. Church schools do not compensate for this. If only they were as succesful at discipling children as the National Secular Society would have people believe they are. 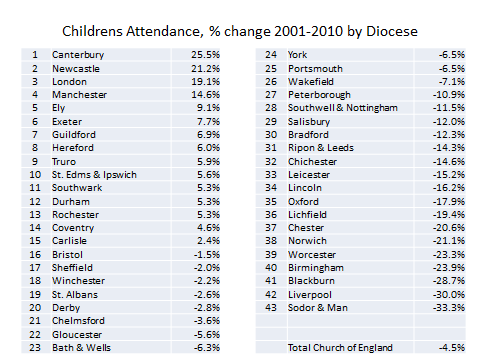 If you're wondering where the 90s stats are from, the source is Bob Jacksons 'Hope for the Church' (synopsis by Alison Morgan here), which I sense has still not been fully read and digested by the powers that be.

My fear is that bishops/synod/etc. will look at these stats and say 'oh hurrah, things are getting better'. Well, they are, in the sense of a man who has one leg amputated one week and only has to have half a leg amputated the following week.

Some more commentary tomorrow, if I can restrain myself that long!
Posted by David Keen at Tuesday, January 24, 2012

Email ThisBlogThis!Share to TwitterShare to FacebookShare to Pinterest
Labels: Church of England, stats