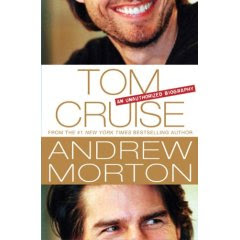 "We are the only ones who can help"

Tom Cruise has been in the news for an unauthorised biography which 'reveals' that he's 2nd in command of Scientologists in the US. Whether or not that's true, if you want to see Cruise saying what a great thing Scientology is, follow this link. The vid was posted briefly on Youtube, before being removed, but thankfully it's been preserved elsewhere in cyberspace.

- I found Cruise increasingly incoherent as the vid went on, and using more and more jargon and in-phrases. It just made me wonder how much we do this in church, and whether there comes a point at which we just stop making sense. I think Christians are better at toning down the jargon than we used to be, but for some folk the 'language of Zion' is still a kind of boundary marker - use certain phrases and they show that you're 'one of us'.

- It's bizarre that there are rich and influential Americans like Cruise who believe all this nonsense, but then money and fame seems to have a disintegrating effect on the personality of celebrities, whether mentally or emotionally/behaviourally (e.g. Britney Spears, Michael Jackson, Lindsey Lohan) . But even if Andrew Morton's book is a load of old cobblers, at least it's put Scientology back under the spotlight where it belongs.

- Cruise makes some outlandish statements in the video - e.g. that when he's driving past a car accident he knows he's the only one who can help (didn't know you were a paramedic too Tom). It made me think about the claims of the gospel - we can't sell short what Jesus did, and the fact that he is the only one who can sort us out and reconnect us with God as his children, but how do we put across these amazing things without sounding like nutters? Or maybe that's it, if we love Jesus we'll just have to cope with whatever people say: he went through it, so will we. We love God with all our minds, and think hard about our faith, what it means, how to present it well, how to make the case for Christ, but to some people it will still sound like nonsense. That's life.

Update: Religion News have helpfully provided a glossary to help people understand what Cruise is on about. And there's now another video.

Meanwhile, whilst we're on film stars, well done to the British film industry and acting profession for a cracking start to the awards season. Even one of the most fancied American stars, Johnny Depp, is up for awards for an Englishman as Sweeney Todd (surrounded by UK thesps like Helena Bonham Carter, Alan Rickman and Timothy Spall). Makes me proud to be British.
Posted by David Keen at Wednesday, January 16, 2008