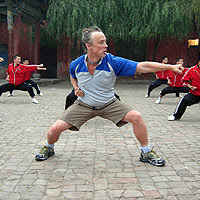 The latest thing in religious programming seems to be the 3-parter. After 'Make me a Muslim' last month, it's the turn of 'Extreme Pilgrim', featuring the very watchable Peter Owen-Jones. He's an Anglican vicar, but you never see a dog-collar, think of a cross between Indiana Jones and middle-aged hippy and you're part way there. There can't be many clergy who use roll-ups and have to be bleeped on BBC2. He's also a lot less annoying than Robert Beckford, Channel 4's house 'theologian'. With a career in advertising and marketing before he became a vicar, he 's also been behind some provocative church advertising campaigns.

The premise of the programme is that P O-J is dissatisfied with Western spirituality, and especially it's Church of England form. He's not a big fan of doctrine, and is frustrated with a Christian faith which bombards people with doctrine but doesn't seem to have spiritual depth, so he's off to try to find spiritual depth somewhere else. First stop is a month with the Shaolin Buddhist monks of China. After a week at a martial arts boot camp (fair play to him for letting himself be filmed trying and failing at things, we need a bit more of that attitude in the church), he finds the constant stream of tourists off-putting, and heads up a remote mountain pass to find a 'purer' form of Buddhism.

What he finds is a spirituality built on two things: community life, and the physical discipline of movement. As he gets into the dance-like moves (I don't know if it was tai chi, or something else, I'm not much of an expert), he discovers that he can actually meditate, clear his mind, and find the stillness he's looking for. Alongside that he finds a strong sense of community life, which seems on the surface to be at odds with Buddhist 'non-attachment', something which is never quite resolved.

It was fascinating to watch, not only to see the monks in action, and POJ's efforts to learn the moves and exercises, but then to reflect back on Christian spirituality. We talk about the body, mind and spirit as a unity, God has made us that way, but Christian spirituality is still stuck somewhere between St. Anthony and the late 20th century, in putting the mind and spirit in the spiritual Premiership and demoting the body to non-league. Discipleship, worship, ministry training, most of the life of the church is centred around words, learning and intellect. Very little is centred around practice, physicality, an embodied life of prayer and discipleship. There is much more of this in the Eastern church, and the charistmatic and (newly rediscovered) Celtic streams of Christianity are reintroducing the body to Western Christianity, but often these feel like add-ons. Last nights programme showed a community for which the physical was the path to the spiritual, a way of moving and breathing developed over centuries.

I've a couple of concerns with 'Extreme Pilgrim'. One is the 'crash diet' concern, that it might portray spirituality as something you only need a month to crack, if you put in enough effort under the right guru. More problematic is the approach, taken by 'Spirituality Shopper' a couple of years ago, of treating all religions as more or less equivalent. I wouldn't want to throw out the doctrinal baby with the bathwater - we do have to reckon with questions of truth and understanding, with who God is, how he has communicated and how we live in right relationship with him. Peter Owen-Jones is right to complain that doctrine is unduly dominant in Western Christianity, but the solution to misuse is not disuse but right use.

See other views from the Mirror, Atheist Tuesday , the Times, and a broader article on religious programming on TV from the Independent.
Posted by David Keen at Saturday, January 05, 2008