The Gospel According to the Simpsons 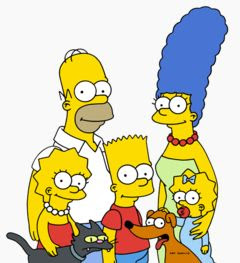 It's such a trial this job - I spent a large part of the afternoon trying to speed-watch Simpsons episodes from seasons 2 and 5 (available in the Woolworths sale at £20 each, which was good value for 20+ episodes each). No, I'm not slacking, our Cafe Service will be doing a mini-series on the Simpsons in the next few months. The tricky bit is finding clips that don't have mild swearing or a sudden appearance from the devil - there's quite a few small kids come along and we don't want to be the cause of nightmares!

It's amazing that a family which prays, goes to church every week, and where the husband and wife stay together and work through their difficulties, is the most popular TV show of the turn of the century. Mark Pinsky's book on the show, The Gospel According to the Simpsons, is a fascinating account of how God, prayer, Christianity and other faiths are presented, as well as looking at the spiritual traditions represented by the different characters.


Frustratingly the book hardly ever tells you which episode certain events or quotes occur in. Never mind, it was a good excuse to watch loads of episodes to try to find them myself. The longlist of possible clips includes:

'Bart Gets an F' great one on prayer - Bart asks God to give him an extra day to study for his final test of the year, and in answer it snows, and school is closed. As Bart heads for the door with his skateboard Lisa confronts him: ‘I don’t know who or what God is exactly, all I know is that he’s a force bigger than Mum or Dad put together and you owe him big’

Homer the Heretic: Homer decides not to go to church, and ends up face to face with God.

Homer vs Lisa and the 8th Commandment: Homer gets cable illegally, and Lisa is convicted after hearing a Sunday school talk on 'thou shalt not steal', so she boycotts the TV. Homer is troubled: "there's something wrong with that kid, she's so moral". Lots of potential avenues, not just on the commandments but whether some sins are small enough to be allowed, what example parents set their children (or not), etc.

Homer Loves Flanders: 'if everyone were like Ned Flanders, there'd be no need for heaven' - on friendship, loyalty, forgiveness, and what to do when people wind you up.

In Marge We Trust: which traces how Rev. Lovejoy got to be boring. What makes Christians give up and lose their enthusiasm?

Sadly Alone Again Natura-Diddly isn't available on DVD yet, where Flanders wife dies and he almost loses his faith, but then gets it back again. Not only funny, but genuinely moving and powerful.

I've tried and failed to find any other churches on the web who have done this, but there must be some out there. All links gratefully accepted.
Posted by David Keen at Tuesday, January 22, 2008

Email ThisBlogThis!Share to TwitterShare to FacebookShare to Pinterest
Labels: TV