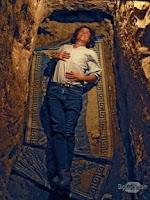 The last Extreme Pilgrim took Peter Owen Jones to the Egyptian desert, to follow in the footsteps of St. Anthony, father of the monastic movement.

Looking at the vastness and bleakness of the desert, you can see why Anthony chose it to get away from it all, after answering God's call to sell everything and give his money to the poor. Owen-Jones was aiming to spend 3 weeks in solitude in a cave in the hills - a mere nothing compared to the decades Anthony spent up there, but most of the people he spoke to reckoned he would struggle.

I was looking forward to this one most of all, because of it's focus on Christian practice and devotion. It was a mixed bag - we met the almost luminous Father Lazarus, with a depth of wisdom and prayer hewn from decades in the desert, but spent just as long looking at camels and tracing the journey to St. Anthony's monastery. The programme was 2/3 through before POJ even got to his cave (2 doors, a narrow one into the prayer cell, a wide one into the food cell). And though the focus of monastic devotion is Jesus, the programme was more interested (as in the previous two episodes) with self-discovery rather than discovering God.

That said, there were some fascinating moments: Lazarus' first question 'how conscious are you of your own sin?' A question rarely asked but a key one. How much better would our politicians, church leaders, mothers and fathers, (in fact pretty much everyone) be if they'd spent time wrestling with that one? Or POJ's realisation "When I got here I was numb. I've only just realised that (3 weeks of solitude and prayer later), and now I'm starting to come alive." How many of the rest of us are numb but don't know it?

And the fascinating question POJ throws into the desert sky, at God, 'why is it all about you?' Well I guess there are 2 choices. Either it's all about God (and therefore Jesus, because that's how we know what God's like), or it's all about ourselves. A narcissistic, self-absorbed Western society has made self into its tribal god, and we are numb, depressed, frantic and restless. Maybe we need to get to the end of ourselves to get to the beginning of God's grace.

Again, there wasn't much reflection at the end. I would have loved to see POJ, back in England a few months later, reflecting on the 3 different pilgrimages, and what he's brought back into daily life. Because God isn't merely a 3 week adventure holiday experience, God is here and present all the time, and what we find of him in the desert is still true back in the city. Jesus took himself away to pray in order to be fully present and alive when he was with people. Good Christian monasticism, like Jesus, withdraws in order to engage, rather than withdrawing purely for the salvation of the individual. It's a rhythm taken to its limit by monks, but one which breathes life into every Christian if they can embrace it. In the series, what was notable was that Christianity was the only one of the 3 faiths to take POJ out of himself and lift his eyes to the world.

The focus (as Lazarus beautifully put it) is not ourselves, but God and other people. When we pray, we stand before God representing humanity, so if we pray all of humanity prays, and if we don't pray all of humanity turns from God, so prayer is of desperate importance.
Update: if you want to explore a bit more, there's a book on St Anthony's monastery and Father Lazarus reviewed here , and a good post about E.P. on the Mercy Blog. Strangely (or not?) posting on 'Extreme Pilgrim' has generated more hits to this blog than anything previously. I don't know what that means, but reading people's reviews of last nights programme, several were powerfully moved by Fr. Lazarus and his words. At one point I knelt in front of the TV and followed his instructions on prayer posture, which isn't something I normally do!
Posted by David Keen at Saturday, January 19, 2008