How nice it was to see the familiar scenery of the Dark Peak as the backdrop to part 2 of this Channel 4 series. You couldn't think of a nicer place to fast and wear a headscarf.
There was slightly less culture clash in this episode, mainly because people were being taken away from their home settings for a weekend retreat in Derbyshire. It was quite an interesting episode on the effects of fasting per se, whatever religious background you come from. The brief summary from the imam: that fasting heightens your senses, opens you to God and brings hidden things to the surface, is something most Christian writers on fasting would agree with.
And there was one moment of great insight from one of the participants: "you don't take on a religion, like some extra bit of yourself, it takes you, it's all-embracing", or something like that, I didn't have the presence of mind to write it down.
There were some very funny bits, like the taxi driver fed up at having a mere jacket potato to break his fast with, so he marched off down to the local pub and found it had stopped serving 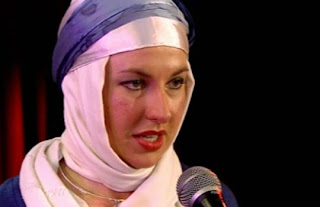 food. Less funny was the freedom with which the adults swore in front of the children present, and how reluctant they were to simply do what they were asked. I was reminded of my 2 year old refusing to get into his car seat - there comes a point where there ceases to be a point to the struggle, and it's just a battle of wills, the independence of the child against the will of the parent. Not for nothing is it called Islam - 'submission', something which crashes right into the independent spirit of the age.

Another issue which keeps cropping up is clothing for the women. The programme shows a mirror to how much we rely on our clothes to express our personality and to communicate with people. And if 'image conscious' can slide over into an unhealthy obsession with how we look (see the fashion industry, the burgeoning cosmetic surgery sector etc.) then how far do we go for concealment, and hide our 'image' in public, in order to save the fuller part of ourselves for our most intimate relationships? Good question to wrestle with. From infancy our kids are targeted with sexualised fashions - see the Bratz brand for pre-school girls - toxic stuff, and we don't realise it.
Posted by David Keen at Monday, December 17, 2007