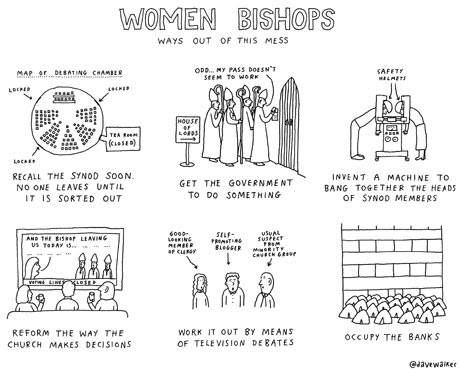 Dave Walker, as reported in the Guardian.

For an even less serious angle, 10 reasons why men should not be ordained.

If you need something more theological, this is pretty good. Rachel Marszalek considers the arguments put forward at Synod for rejecting the measure. You'll need a few minutes to read that one too.

Tina, a pioneer ministry in the north of my diocese, has written an 'elegy for the light spectrum', which is great.

The Ugley Vicar has drafted a 'parish magazine' article trying to explain what went wrong. It's from the conservative standpoint, but it does highlight how almost impossible it's been to find a form of words which commands enough of a majority.

My guess is that, if you're a conservative evangelical or traditionalist catholic, the next few months is your only opportunity for finding a suitable settlement. There are suddenly plenty of energised and passionate laity up and down the country who are in favour of women bishops and want to find a way to get onto General Synod to sort this mess out. There are even petitions calling for the entire Synod to step aside now, or for it t be abolished. That might be cathartic but I think General Synod needs to lie in the bed it has made, and take responsibility for sorting this out in the next 6-9 months. If it's left to the 2015-18 Synod, I can't see many Reform candidates being elected that time round.

It would be ironic if traditionalists found themselves looking back on November 2012 as the best provision they could have had. In the meantime Deanery and Diocesan synods can already start clearing their agendas for 2013 for the motions which are going to come before them.
Posted by David Keen at Saturday, November 24, 2012