Pros and Cons (and Libdems) 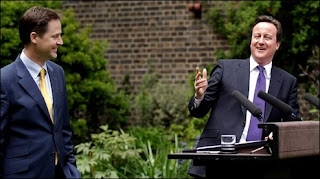 of the last few days, but a few thoughts:

1. I'm delighted that the Conservatives and Libdems are aiming high: a coalition rather than a laissez fair 'understanding', coupled with a fixed term parliament that will lock them into it for 5 years. There appears to have been some genuine give and take over policy. For a floating voter like me, who supported roughly 30-40% of each parties policies, this only way of getting a government which delivers a majority of stuff I agree with. Of course, it could go the other way and end up with all the policies I'd oppose, but early signs are ok: no Euro, no ID cards, progressive taxation, though I did think the immigration amnesty idea had something going for it.

2. This could be good news for Labour: as the only major opposition party left, if anything does go wrong then they get 100% of the benefits, as well as plenty of time to rebuild after the end of the Blair/Brown years. It is much more high stakes for the Libdems: this kind of coalition would be the norm under PR, so if they can't make it work, any argument for PR would be holed below the waterline.

3. There are a lot of cynical voices about the coalition, and maybe it's just my optimistic temperament, but I'm not one of them. In our parish there are 2 clergy, we're quite different from each other in many ways, but know that the best way to run it is to talk things through, agree a common approach, and run things as a team. This kind of thing happens all over the place. For politicians it will be a massive culture change, but the two leaders are themselves both quite new to all this (both entered Parliament this century), and perhaps a wholesale culture change is possible. If they manage it, great.

4. Will the 'New Politics' involve the rebuilding of the House of Commons? The chamber is organised for adversarial politics, unlike many more recently built chambers which are circular or multi-sided. Maybe they should move across the road to the circular Church House synod chamber - might generate some much needed rental income for the CofE.

5. Will the spirit of co-operation infect the media too? Like the House chamber, the press is based on adversarial politics. Come to think of it, not just the press: the spirit of Paxman lurks over everything from the Apprentice to Dragons Den to the X Factor, we love our bear pits. What happens if politics tries to move out of the bear pit and refuses to offer routine bloodletting for public entertainment? Will it be allowed to? Can journalists act like grown ups too? I would love to see a change of political culture - and culture in general - to something less adversarial. Perhaps that's enough to hope for. As Simon Parke puts it in his cracker of a book Desert Child

"The message... is that we turn our attention to the Great Possibility, the Grand Miracle, the Massive Moment, the Huge Resurrection"

"That we might actually do what we're doing with a little more kindness."

"That we might actually do what we're doing with a little more kindess?" Musselly was checking that he had heard aright. Peter, however, confirmed the astounding declaration.

"Indeed. That we might do what we're doing, only with a little more kindness."

The earth stopped revolving for a moment in shock as the two men considered the implications of the words just spoken; as the two men felt the fall-out from the bombshell just lobbed into the conversation. The visitor spoke first.

"Now that is a very revolutionary thought, my friend."

6. It's a good way to bury bad policies: there are a few duffers and vote-losers in there which can be quietly shelved in the name of compromise, on both sides. If both sides of an argument are represented within a government, then someone somewhere is right, and hopefully no party is arrogant enough to think it has all the answers.

7. It's important not to get carried away. Tony Blair wasn't the Messiah, at times he was just a very naughty boy, and neither are these two. There are some things that politicians can't fix: I was in a meeting recently over a local trouble spot, and the overwhelming feeling was one of impotence over the ability of local government, agencies, etc. to do anything significant to change things. Bill Hybels writes:

"For 8 years during the '90s I went to Washington DC every month to meet in the foremost centres of power with some of the highest elected officials in our country. What I discovered was not how powerful those people are, but how limited their power really is. All they can actually do is rearrange the yard markers on the playing field of life (I'm guessing that's an Americanism). They can't change a human heart. They can't heal a wounded soul. They can't turn hatred into love. They can't bring about repentance, forgiveness, reconciliation, peace. They can't get to the core problem of the kid I saw in the airport (an 8 year old boy punching his 5 year old brother in the face then bashing his head into the floor) and millions of others like him.

I scrolled through every other option I could think of, considering what they have to offer. Businessmen can provide sorely needed jobs. Wise educators can teach useful knowledge of the world. Self-help programs can offer effective methods of behaviour modification. Psychology can aid self-understanding. And all of this is good. But can any of it truly transform the human heart?"

So we carry on praying for our leaders, and I'll be praying that it works - that's partly the optimist in me that likes to see people trying something new, and partly the knowledge that if it doesn't work then that won't really do anyone any good.
Posted by David Keen at Thursday, May 13, 2010