It's Death Jimbo, But Not as We Know It

With the end of Ashes to Ashes last Friday, there now won't be anything worth watching on TV until the BBC gets the rights to The Ashes back in a few years time. The rest of the world has probably forgotten about it already, but as I only caught up with the finale on Iplayer yesterday.....

It turned out that the series was set in a form of Purgatory. There can't be many TV series that last for 3 series (5 if you count Life on Mars) where all the main characters are dead. Gene Hunt, it turns out, was also a dead cop, whose role it was to see other cops who died before their time safely through the right door. In A2A, the door in question is a pub.

If a round in the Railway Arms was heaven (echoes of the banquet parables?), then Hell was the basement of a police station, with Jim Keats as Satan. He plays the role of the tempter/tester all the way through, questioning the teams faith in Hunt, and trying to lure them away from him. At the end though, the team still have a choice - do they step through the door Keats is offering them, or do they choose to walk away. Temptation never forces you to do anything, the choice is still ours. 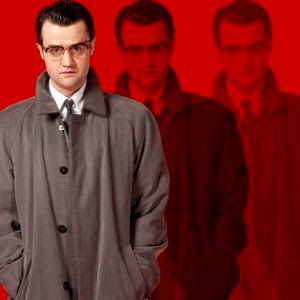 There's even an echo of CS Lewis 'Screwtape Letters' in the reports which Jim Keats 'files' on the A2A website: Do you like to be called “sir”, sir? I don’t. Don’t like Chief Inspector or even Mister. I like it when people call me “Jimmy” or “Jimbo” or “Pencil Neck” or “Four Eyes”. Why? Because it means they are under-estimating me. And that is when I am at my most effective. My most powerful. Discuss.

Later on : As for my report on DCI Hunt - it is finished. I must say, it makes for fascinating reading. Fascinating.
“And you will know the truth and the truth shall make you free.”
John Chapter 8, verse 32. I believe. I know my Bible. Must know almost every verse.

I'm kicking myself now that I didn't pick up those clues, unlike a colleague in my pub quiz team who gave me his idea of what was happening last week, and turned out to be pretty much spot on. The writers are completely up front about Keats being the Devil (see 'The Conclusion' vid here). And it turns out my theory about the Quattro numberplate and a link to July 7th was completely wrong. The biggest clue of all, of course, is the title of the show.

The spell in purgatory/limbo seems to function a bit like the Wizard of Oz (which gets repeatedly referenced through the series). Ray comes to terms with his guilt and becomes both wiser and more humane (a heart?), Chris gets his courage (the lion), Shaz gets recognition. It seems to be completing the work of personal growth that was interrupted by their premature deaths, but these changes only happen because of Alex's intervention: with just Gene Hunt as their 'guv', the three are stuck. The ferryman on the Styx needed a shove to get him all the way across, and that was Alex's job.

Great ending: Hunt back in his office looking at a brochure for a new car, to replace the beloved Quattro ("you murdered my car!"), when a new arrival bursts in "where's my desk, where's my Iphone?" and Hunt is back into action. Heaven as an inn with Jesus as the landlord: 'in my Fathers house are many rooms'. Not far off. So what does really happen after we die...?..good one to chat about over a pint.