They Will Be Bored 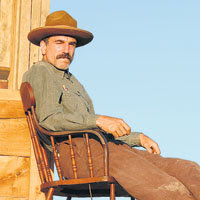 The critical consensus on There Will Be Blood is that it's a very good film. Rotten Tomatoes, which logs film reviews in the English-speaking press, reports that 91% of reviews of the film were positive.

However, read a selection of reviews by normal people and you find a slightly different story. This is one of those reviews. Plot spoilers follow, so if you don't want to know them, look away now.

The film opens with what sounds like 100 violins being violently ill all at the same time, and takes us underground to where Daniel Plainview (played by Daniel Day Lewis) is digging for silver. The film traces his rise as an oil prospector, as he buys up tracts of land in competition with the big oil producers and makes his fortune as an oil man. We also witness his psychological unravelling from determined and driven to hate-filled and psychopathic.

Along the way Plainview moves to New Boston, a small poor community with a railway station and little else. The local preacher, Eli Sunday, tries to use Plainviews presence to consolidate his power and influence in the community, and they soon come into conflict. This is a bare knuckle fight between capitalism and religion - neither painted in affectionate colours - for the soul of the community. Neither deserves to win: the preacher is manipulative and devious, the oil man is increasingly driven by greed and hate, and along the way abandons his son and murders the only friend he has.

The film ends with Plainview rich, reclusive and lonely, driving his son away, and then murdering Pastor Sunday, who has called round to wheedle some money out of him. It's a desolate ending to 158 minutes of desolate film.
Lets start with the good bits. There are some good performances, though they become increasingly melodramatic as the film goes on. The scenery is spectacular, and the set pieces - like the explosion and fire at the oil well - are superbly done. You get a real sense of how tough life was even 100 years ago, and how the riches of oil or the favour of God seemed to offer people a way out, an escape route.

In a way it is a snapshot to set alongside 'Gangs of New York', Scorseses brutal but powerful epic set in the mid-1800's several state away. Both show some of the birth pangs of the modern USA. The other connection to Gangs of New York is Day-Lewis, who plays the leading role in that film and this. Trouble is, whenever I looked at 'There Will Be Blood's Plainview, I saw Bill the Butcher from 'Gangs' - big moustache, same mannerisms, same volcanic sense of menace and threat. There seemed to be a lot of overlap between the two performances, too much in fact.

The trouble is that aside from Day-Lewis, there is hardly anyone else in the film. Son HW Plainview spends most of the film mute and silent, Pastor Sunday is absent for large tracts of it, and Plainviews right hand man (played by Ciaran Hinds) is just a solid right hand man, and never changes. Plainviews (imposter) long-lost brother is the only other character given space to breathe. There is hardly any dialogue voiced by women. Ok this is a mans world: oil, mines, railroads, big business, but most of the characters seem to be there as scenery rather than as people.

The film grinds slowly on, the 2 fleeting chances of redemption (friendship through a brother who turns out to be a fake, repentance through a pastor who is also a fake - a repentance which Plainview is blackmailed into) are spurned, and Plainview just gets nastier and nastier. This truly is a thankless experience, and what could have been a powerful study into money and religion ends up sour-tasting and vaguely unbelievable. The trouble with films which show the process of someone becoming a murderer is that they have to make the crossing of that particular line very convincing, and for me There Will Be Blood doesn't do it.

As for the spiritual side of the film, there seems to be no geniune faith in this film apart from the 'simple village folk' faith which is completely taken in by their showman preacher. God is a tool used by Pastor Sunday to manipulate people, and the subtext is that pentecostal religion and charismatic leaders (and there's plenty of that in the US at the moment) may just be after the same things as the capitalists - power and money. I guess this will resonate more with a US audience than it did with me. At present several leading US televangelists are under investigation for tax liability, so that part of the story is certainly bang up to date. However I remain to be convinced how any Hollywood studio marketing a 'money makes you miserable' film can possibly be sincere.

"I look at people and I see nothing worth liking" - that's a bit of dialogue obviously meant to reflect on Plainviews character, but for me it came dangerously close to summing up the film too.
Posted by David Keen at Saturday, March 08, 2008

Email ThisBlogThis!Share to TwitterShare to FacebookShare to Pinterest
Labels: films