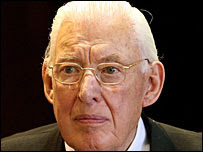 Or in Tony Blairs's words:
Ian Paisley's contribution to peace, after all the years of division and difference was decisive and determinative.
In short, in the final analysis, he made it happen.
The man famous for saying 'no' will go down in history for saying 'yes'.
He did so personally convinced it was right and in reaching that conviction, consigning to the past the feelings he once so trenchantly articulated.

PS: to clarify if you're not in the UK - the character on the left is in an oft-repeated BBC show 'The Vicar of Dibley' and his catchphrase is 'no no no no no no no no no.....yes'. It is slightly funnier than it looks in print. Well, it was the first time.
Posted by David Keen at Wednesday, March 05, 2008