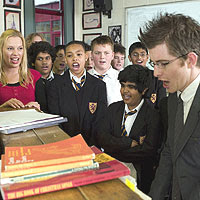 In the middle of a trip up to Darlington to see old (and not so old) friends, we managed to catch the last episode of this excellent series. The BBC site has been upgraded with various clips from episodes and can be found here. The links on the side of that page might explain why I came back from a few days away and discovered 700 people had visited in 2 days. 'Part time TV critic' can now go on my CV........

Anyway, back to the programme. It was a fittingly triumphant ending - teacher Gareth Malone managed to coach the choir to it's performance at the Royal Albert Hall, integrate the beatbox crew with the regular choir, and get the school governors agreement 'in principle' to funding a post to support singing at the school in the future after he leaves.


Again, all sorts of things jumped out:


1. Mentoring: there's been lots of this in the series. This time round there was the amazing sight of the Lancaster school choir (est 6 months ago) singing next to the Kings College Choir (est some time before Bruce Forsyth was born), effectively in pairs, each Lancaster boy being mentored by a Kings chorister. They came out suitably inspired and encouraged. Gareth himself taught the music teacher the basics of conducting, though I'm not sure I'd want to make my conducting debut at the Albert Hall!! There was lots of 1-to-1 teaching going on, which is something that is gradually being rediscovered in business and youth work, but which the church is still a bit shy of.


The bit in the Kings chapel put me in mind of the title Jesus gives to the Holy Spirit: the 'Advocate' - which literally means 'one who stands alongside'. As we sing our faltering song to God, the Spirit stands beside us, holding the same music, holding the tune and the note and the rhythm to help us to get in tune.


2. Inspiration and Perspiration: alongside the occasional high of the visit to Kings was the relentless slog of practicing the 2 pieces for the Albert Hall. I guess we all need the mixture - discipleship, life, learning to sing, any project needs something which gives us a vision, but without falling into the trap of thinking that vision, inspiration and a 'high' will deliver quality.


There's a myth in Christian circles that all you need is enough of the Holy Spirit and you will magically be capable of stuff you've never done before, like sharing your faith, resisting temptation etc. In a way that's true, but it's also extremely lazy. The path to holiness is the path of the spiritual disciplines - prayer, chewing on the Bible, dealing with sin, loving people - and there aren't short cuts to being like Jesus. Yes we need the vision of God and the fire of the Spirit burning in our guts to keep us going on this path, but it's not easy.


3. Leaving a Legacy. Gareth did various things to make sure singing didn't finish the moment he left. This is a key challenge for all leaders, to make sure that those after you don't live in your shadow, but are equipped to go forward. I liked the way he involved the music staff all the way along, and got the head involved in as much as possible - get key leaders and stakeholders involved, and on your side, and it makes things so much easier. Through getting the boys themselves to speak to the governors about the effect of the choir on their own lives, he won the governing body over to fund a singing tutor for the future.


I find investing in other leaders, and in legacy stuff, very hard to do. It needs time - one thing that came out of the trip to Darlington was that, with the church now more stretched for resources (my post was discontinued), those in leadership have less time available to develop other leaders. Unless you really carve it out, it's very hard to make this a priority, and to work out the best way to do it.


4. Return of the Prodigal. One of the delights was seeing Imran, one of the most gifted singers in the school, take the mic at the Albert Hall for a solo. Having been a promising student who'd gone off the rails and quit singing, this was redemption time. Gareth Malone had left an open door, worked on Imran through his peer group rather than going at him direct, and won him round, and now we saw Imran freely admitting that he handled it badly and was the cause of his own problems.


It was an interesting bit of tribal evangelism: in our individualistic culture, we often forget how key the 'tribe' is to peoples identity, and Gareth worked out that to win Imran round, he had to win his 'beatbox crew' friends round. Shades there of Christianity Rediscovered (good article here), a book on mission to the Masai tribe by missionary Vincent Donovan, who discovered that individualistic Western models of mission failed completely when applied to a tribal culture.

My main concern would be that having got to the Albert Hall, what is there left to achieve? How to get the boys excited about a lesser challenge when they've performed at the top venue, in the top show (The Proms) in the country? I guess that's a pertinent challenge too. Christian life will always have high points and low points. I know lots of people for whom Spring Harvest, or Soul Survivor, is the high point of their year, and the challenge for the rest of the year is to take the encouragement, teaching and energy of those festivals into day to day working and church life.


I guess that's the post-Transfiguration moment: Jesus bringing the disciples back down the mountain into a situation of mess and failure. We all have to come back down the mountain at some stage, there can be no building of shelters and prolonging the moment. It's there, it passes, and life goes on.
Posted by David Keen at Sunday, February 24, 2008