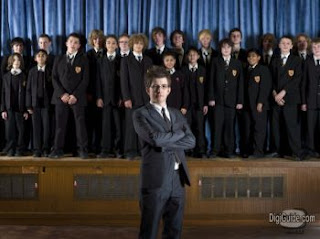 If last weeks episode of this fascinating series was about calling, this week was about how you train and develop a team to multiply your own ministry and influence. The boys choir at the Lancaster school, Leicester (confused already?) had a healthy number of recruits, but getting them to sing was a further challenge.

I liked the way that Gareth, the singing teacher, not only kept looking for individual talent, but he also kept putting a vision in front of them, a challenge to rise to - of singing at the end of term show, with solo parts for those who came forward. Again, through setting the bar high, he actually got more out of the lads than if he'd been woolly and accepted less.

We also had a great example of the boys themselves becoming the evangelists. Gareth had identified Mr Foreman, the head of year 9 & 10, as the gatekeeper in the school, the 'alpha male'. Maybe Jesus might have called him the 'man of peace' - the one who's welcome gives you a base for ministry and outreach. In a breathtakingly bold move, (and we're left unclear about whose idea this was), some of the boys go into Foremans class and sing a song about him being a hypocrite unless he joins the choir. After months of resistance, he gives in, goes to Gareth for singing lessons, and takes his place in the staff choir. The boys prove more effective at evangelism than Gareth is, and that's a great secret in leadership. Most of the stuff that needs doing will be done better by other people than by you. The trick is to motivate and mobilise them.

The end of the episode was a brilliant bit of symbolism. Sport is the spiritual heart of the school, so Gareth got together a staff choir, browbeat the (all male) PE staff into being part of it, and had them sing as part of the sports day. This reminded me of Christian missionaries building churches over the pagan sites in ancient Britain. Find where the energy is and go there with the message, rather than set up somewhere else and try to call people over to you. It made a great statement on 2 levels: 1 that the staff were prepared to sing and 2 that singing is as much at the heart of what it is to in this school as sport.

I would imagine that the boys in the school see Christianity on pretty much of a par with singing - limp, girly, not something they'd want to be seen doing. There is so much to learn from seeing how 1 teacher, bravely and successfully, changes the whole culture of a school. It was also interesting to see that at the end, after the boys had performed succesfully at the school show, that amongst Gareths congratulations was more exhortation - you can still get better, do better, raise the bar. Again, that's discipleship. It's not a few weeks practice for one performance, it's continual growth in grace, and rising to the challenges that Jesus sets. I just see so much in common between this series and the way Jesus calls, trains, equips and releases disciples.
Posted by David Keen at Saturday, February 09, 2008