Lay off my Archbishop 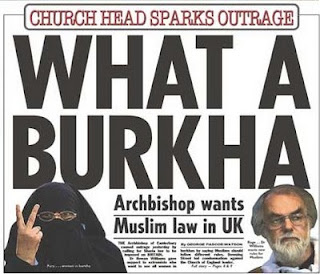 Pray for Rowan Williams. Whether you like him or not, agree with him or not, nobody deserves the public flogging he's getting from the media for suggesting we might discuss a limited and specific idea on how Muslims might be better integrated into British society. Unfortunately he has become the story, and in an attempt to spin it out there is now the follow up wave of 'should he resign' stories.
No he shouldn't resign. That's a job for whoever was responsible for the Two Minutes Hate that was yesterdays Sun.
If this is what happens whenever someone tries to start a debate on a serious subject, it's no wonder we get politicians who are more concerned with lining their pockets than thinking through the issues our society faces. After this, who will dare to open up a debate on the place of Islam in modern Britain? Knowing how contentious the subject is, RW should, in hindsight, have run his ideas past a few people first. But hey, that's what mistakes are for - learning from. We also have a culture which doesn't allow people to make mistakes in public. It's the culture of the gladiator - as soon as you put yourself on the floor of the arena, its you vs the wild animals, and the population bays for blood from the stands. When Tony Blair described the media as a 'pack of feral beasts', he wasn't far off the mark. Unfortunately, it's not far off the mark for the rest of us either.
Cyberspace is bursting with stuff on this story, only one link here, to someone who is prepared to be sensible about it: Obsolete . It's a long piece, but here's my rule of thumb for anyone debating Rowan Williams - unless you're prepared to read at length, think at length, and work out what you'd be prepared to say to his face, then just don't even bother, what you have to say isn't worth hearing.
Here's the official CofE media page on the ABC's lecture and interview, with links to full transcripts.
Update: new statement from the ABC on his website, reported here.
Posted by David Keen at Saturday, February 09, 2008

Email ThisBlogThis!Share to TwitterShare to FacebookShare to Pinterest
Labels: Archbishop of Cantrbury, Islam