Following on from yesterdays figures for adult attendance, here's the stats on childrens attendance at CofE churches from 1989-2010. I hope that Synod this week can take time away from rearranging the dog collars on our cruise liner, and the usual tittle tattle about Rowan Williams, to ask what this data means for us. 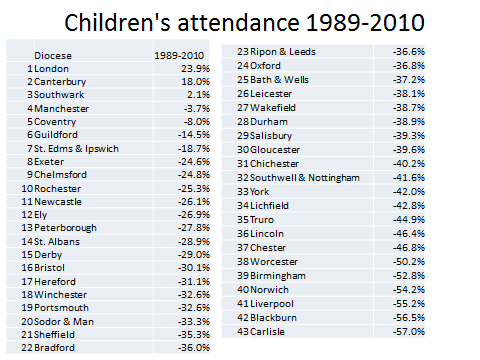 The same riders apply to these figures as to the adult ones: it's 2 different measures for the 2 decades (usual Sunday attendance, then average weekly attendance) and theres a gap for comparison between 1999 and 2000.

The good news is that 15 Dioceses saw childrens numbers grow in the Noughties, which for all except London was a reversal of decline the previous decade. So it is possible to turn things around. Remarkable as it seems from the stats above, Carlisle actually saw some growth from 2000-2010. Yes, the 90s were that bad.

And that's about all I can do to cheer you up. At every other level this is catastrophic. If any other sort of organisation had these sorts of stats, we'd be debating a lot more than bonuses. It leave it for others to print off this chart, leave it on every seat at General Synod along with yesterdays stats, and ask at what point Synod will give some concerted energy to talking about the future of the CofE. And no, the solution is not more church schools. The state education system cannot, and should not, do the church's work for it. And it's obvious from the data above that, even if it is, it's not doing it very well.

It's times like this when union with the Methodists seems like a good idea. Here is what their equivalent of Synod was discussing and endorsing a few months ago. A church shaped for discipleship and mission? Are we?
Posted by David Keen at Sunday, February 05, 2012