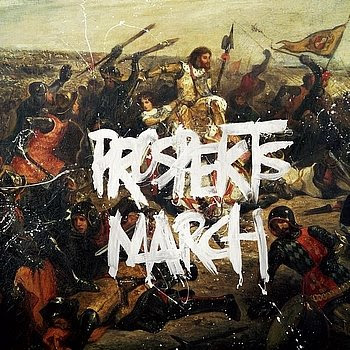 Coldplays Viva La Vida was a subtle assault on U2's crown as the most spiritual stadium band of the turn of the millenium. Prospekts March, the Coldplay EP released last week, isn't quite such rich pickings, but there are one or two intriguing clues to the spirit of Coldplay.
The EP has 8 tracks, 3 are remixes of tracks on Viva La Vida (Lost+, Lovers in Japan and Life in Technicolour ii, which adds a layer of vocals over the original instrumental). There are 5 new tracks: Postcards from Far Away (short instrumental), Glass of Water, Rainy Day, Prospekts March/Poppyfields, and Now My Feet Won't Touch the Ground. There aren't any official lyrics with the CD, but this site is as good as any for finding them.
As a Coldplay fan, I wasn't disappointed - quite frankly I couldn't work out how Lovers in Japan had been remixed, but don't care because it's my favourite track of 2008. And Glass of Water is a cracker. There are cross-references a-plenty 'Now My Feet' picks up from the refrain of 'Death Will Never Conquer', a rootsy concert extra on Coldplay's latest tour, and there's some Pink Floyd in there for the discerning customer too. The whole CD checks in at nearly 30m, which is pretty good for an EP, and longer than some Smiths LP's used to be.
The most obvious religious references crop up in Lost +:
See Jesus, see Judas/ See Caesar, see Brutus/ see success is like suicide/Suicide, it's a suicide/If you succeed, prepare to be crucified (done by rapper Jay-Z)
where the rapper seems to be comparing the fate of Jesus to that of various rap artists and black leaders who were killed (Martin Luther, Malcolm X). I'm not convinced about putting rap artists on the same plinth as civil rights leaders, but the insight is fair enough - 'if you succeed, prepare to be crucified'. There is a world of difference, though, between the crucifixion of Jesus and any other martyrdom. Sure we take up our cross and follow him, but I wouldn't pretend that any of our suffering is equivalent to what Jesus did, or to argue that Notorious Big is somehow deserving of being on a roll-call of martys alongside the Son of God. Is that because I is white?

Email ThisBlogThis!Share to TwitterShare to FacebookShare to Pinterest
Labels: Coldplay, spirituality, U2