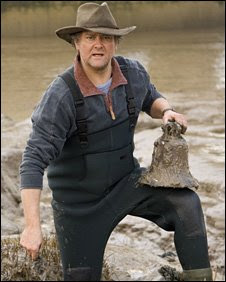 The finale of Bonekickers was laughably bad. I was doing some mental maths to work out how long it would take to shuttle between Bath, Clevedon, Wells and Glastonbury on our rustic road system, compared to the impression given last night that they were all neighbours in a cul-de-sac. Never mind being able to break into Wells Cathedral and the Bishops Palace at night with a sackful of diving equipment, and the corny Excalibur moment. But it's been fun, and Hugh Bonneville has finally been given a role he can chew on. It could do without the regulation gory death per episode though.
Someone on this comments thread notes that the BBC bonekickers site has been taken down, drowned under the weight of negative comments. Not true, (though they don't post new messages between midnight and 9am, to allow moderation) but it's a conspiracy theory worthy of the series itself.
Posted by David Keen at Wednesday, August 13, 2008